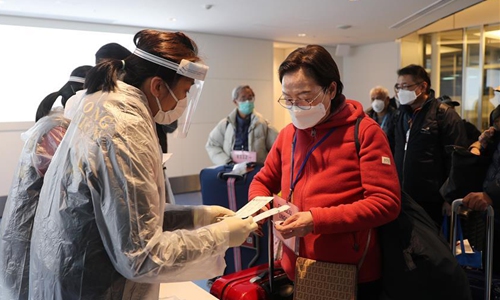 With the rising number of confirmed coronavirus cases in Hong Kong and the difficulty in tracing the majority of infection and transmission paths, the situation has become very worrying and more stringent measures will be adopted, according to Hong Kong's top officials.

In an online blog on Sunday, Chief Secretary for Administration Matthew Cheung noted that the Hong Kong government sent out more than 51,000 compulsory quarantine orders from March 19 to 31, with 2,600 quarantine units across the special administrative region (SAR).

Statistics on the government's website show that there have been 862 confirmed cases as of Sunday, and four people have died.

Song Zhongping, a TV commentator based in Hong Kong, approved of the mandatory quarantine orders launched by the HKSAR government, saying that the orders are designed to verify suspected cases and close contacts that require thorough screening.

The government has taken necessary measures in trying to keep potential risks stemming from the COVID-19 outbreak in Hong Kong under control, Song told the Global Times Sunday.

On Sunday, local media cited Executive Council convenor Bernard Chan who said the city may have to impose a wider lockdown and close all non-essential businesses for several weeks.

However, the government's efforts are being impeded by various factors, according to Basa Leung, a political analyst based in Hong Kong.

Leung told the Global Times on Sunday that there are three groups of confirmed cases in Hong Kong, with the first mainly coming from the mainland amid the mainland's initial outbreak, the second from passengers formerly aboard the Diamond Princess cruise ship, and the third from abroad since many Hongkongers returned after the virus raged on foreign soil.

Despite strict and timely government measures to curb the spread of the virus, people in Hong Kong have not been as vigilant as those in the mainland have been, observed Leung, adding that people's lack of trust in the government, as well as opposition forces' objection and politicization of government measures, also jeopardize the viral fight.

About 130 from an anti-riot squad in the West Kowloon region will be placed under quarantine for two weeks after a 46-year-old sergeant from the Police Tactical Unit of the region was confirmed as infected on Saturday. He was the fourth police officer in Hong Kong to become infected with the coronavirus.

By late Saturday, the Department of Health had not found the source of infection of the sergeant and did not exclude the possibility of his connection with another constable from the unit who was previously diagnosed.

According to local media reports, the two shared a toilet block, shower room, and changing room.

The newly infected officer was involved in handling a massive protest at Prince Edward MTR station on Tuesday night. Protesters gathered to mark seven months since clashes there between the police and violent anti-government protesters.

Cheung wrote on his blog that the police's efforts in assisting to cut the viral transmission chain are highly commended.

The number of protests has gone down since the coronavirus epidemic, but Leung believes that the occasional gatherings still pose a challenge to the government's virus-fighting efforts.

Hong Kong's Financial Secretary Paul Chan also wrote a blog on Sunday. He acknowledged the ever increasing economic pressure amid the spread of the coronavirus while suggesting individuals and companies prepare for dim economic prospects in the next six months.

He also noted that the financial pressure faced by all sectors mainly stems from employees' salaries, rent, and capital flow. The SAR government is launching more comprehensive measures that aim to support companies and ensure employment, he added.