Hong Kong Chief Executive Carrie Lam's decision to give up her honorary fellowship at the University of Cambridge's Wolfson College due to unwarranted accusations from UK politicians over Hong Kong affairs has been widely backed and commented on by netizens and observers who said it is a mature and dignified move.

Following the statement that she is about to cancel her US visa, Lam on Saturday confirmed in a Facebook post that she voluntarily gave up her fellowship at Wolfson College as she believed that the college president had come under pressure from UK politicians, the media and certain groups to revoke her fellowship since last year's anti-extradition  protests. 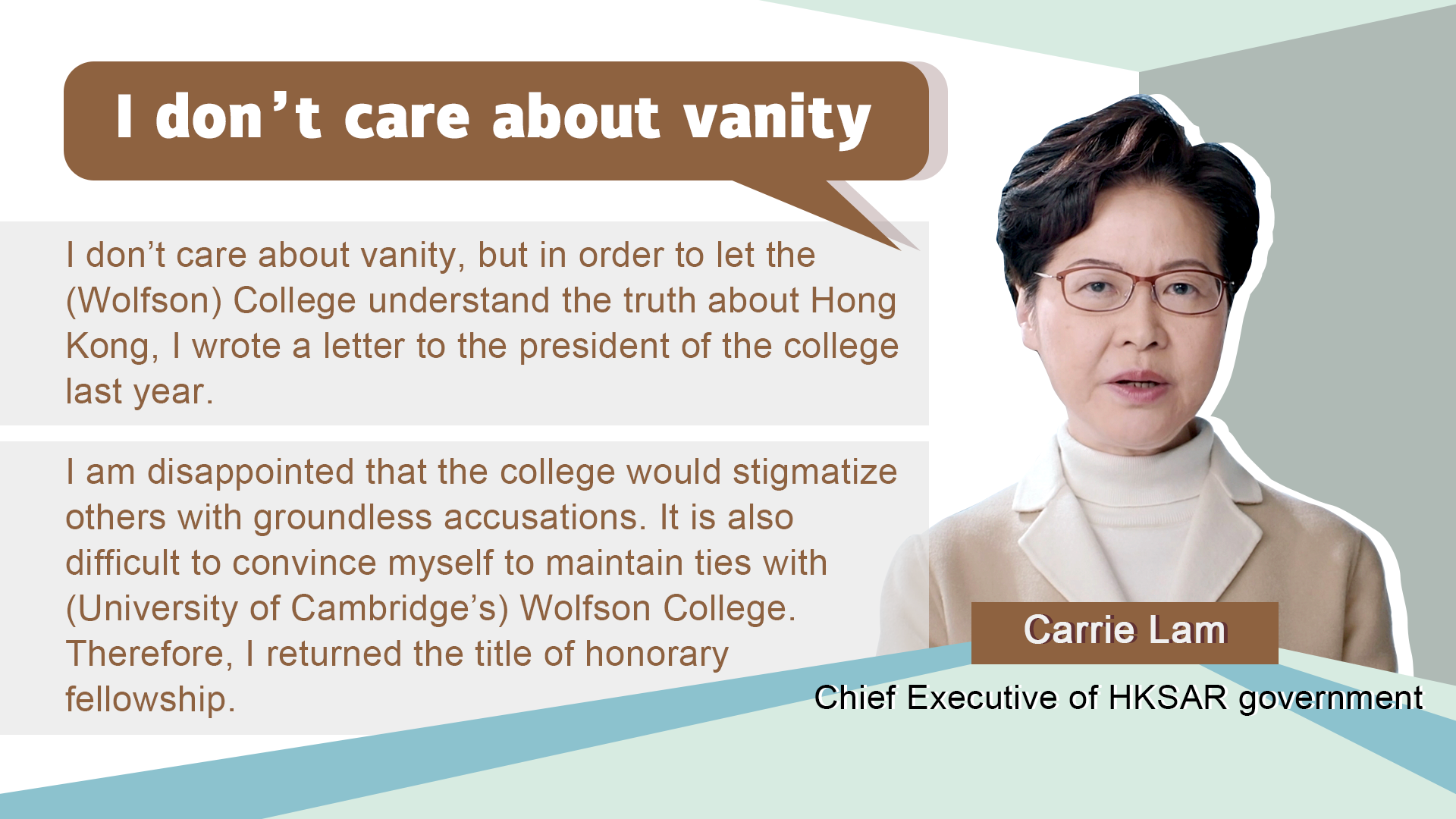 Lam was bestowed the fellowship at Wolfson College in 2017 after she was elected chief executive of the Hong Kong Special Administrative Region (HKSAR). She noted that college president Jane Clarke had written to her to inform her that some people had asked the college to revoke the fellowship.

Three British lawmakers put pressure on the university during the social unrest in Hong Kong in 2019. On Saturday, the college said it had planned to consider Lam's honorary fellowship in September, but will no longer do so.

"I cannot persuade myself to continue having any connection with Wolfson College and therefore decided to give back the honorary fellowship," Lam wrote on Facebook, expressing her disappointment at the college's attitude after writing to it for clarification.

On the "Register of Members' Interests" webpage of HKSAR government officials, Lam's record on Wolfson College was crossed out.

In the face of UK's "honor sanctions," Lam as the city's top civil servant has set an example for other Hong Kong officials, Tian Feilong, a legal expert on Hong Kong affairs at Beihang University in Beijing, told the Global Times on Sunday.

Tian said that Lam is a model and outstanding political officer jointly cultivated by the Hong Kong and the UK systems, meeting all the norms of modern administration. Lam has returned the tainted honor to the UK after the West's political tricks, said Tian.

Lam is not the first Hong Kong politician to give up an honorary title due to political slander from the West. In 2019, Hong Kong lawmaker Junius Ho was stripped of an honorary law degree by Anglia Ruskin University, his alma mater in Britain after groundless accusations of UK Lord David Alton. The university revoked Ho's honorary degree without conducting investigations. Ho told the Global Times previously that his experience demonstrates that so-called justice in the UK judicial procedure is flawed, and the university has no idea of how to deal with major issues of right and wrong.

Tian noted that the Western "honor system" is part of its soft power, which has never been divorced from politics. "The system pretends to be objective and neutral but stands with Western politicians whenever there is a conflict, which shows its hypocrisy."

So far, 11 Hong Kong officials have been sanctioned by the US, including Lam. Following the US' move, observers believe that more influential Hong Kong officials will encounter the similar experience as Lam. However, after prolonged unrest and foreign interference, Hong Kong government officials, headed by Lam, have really begun to move toward political maturity under the "one country, two systems."

The UK still views itself as "the empire where the sun never sets," as some of its politicians always politicize scholarship and, through honorary titles, buy off or place restrictions on politicians from other countries, Li Xiaobing, an expert on Hong Kong, Macao and Taiwan studies at Nankai University in Tianjin, told the Global Times on Sunday.

For Hong Kong officials, protecting the city and upholding national security are the highest honors. Through this move, Lam demonstrated her political maturity and awareness, leaving Britain to its own disgrace, Li said, noting that Lam behaved with dignity and poise.

Former HKSAR chief executive Leung Chun-ying supported Lam through a Facebook post on Saturday, which said that Lam's previous decision to become an honorary fellow of Wolfson College is an honor for the University of Cambridge and speaks to the close relationship between HKSAR and the UK.

"It is the British who stand to lose a lot of money and other things, both in Hong Kong and in the Chinese mainland through Hong Kong," Leung said.

Lam's action also won the support from the Chinese mainland. "Sending my sincere support and respect to Lam, and all female leaders! You are a role model for the next generation," said an internet user on Sina Weibo.

"Hong Kong should be proud to have you as chief executive, it's very brave of you to do that," said another.