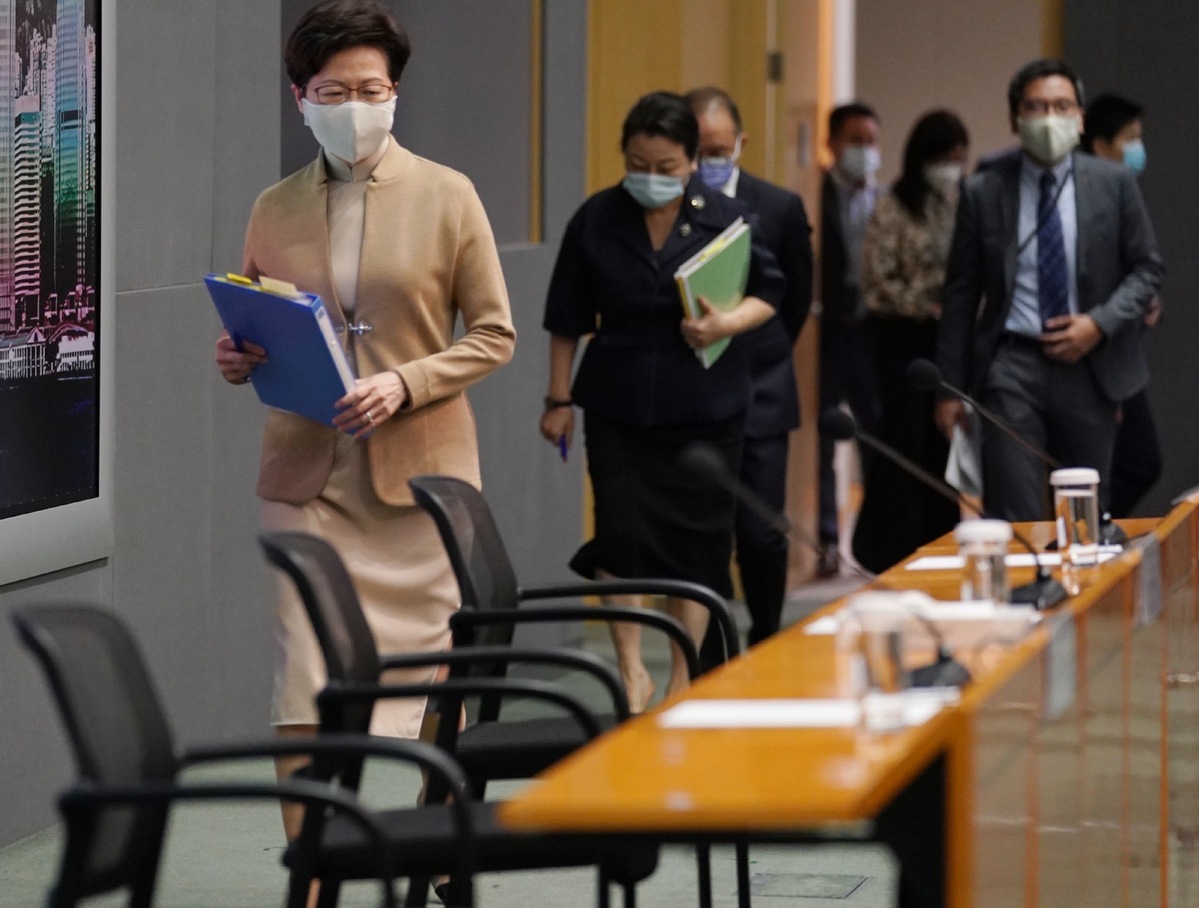 The decision by the country's top legislature on the qualification of members of the Hong Kong Legislative Council has set a clear standard for the future operation of the city's legislative body, Hong Kong Chief Executive Carrie Lam Cheng Yuet-ngor said on Wednesday.

Meanwhile, it will also improve the city's implementation of the "one country, two systems" principle as the Hong Kong Special Administrative Region will be governed by those who love both the city and the nation, Lam said during a media briefing following the announcement of the decision.

The Standing Committee of the National People's Congress announced that Hong Kong LegCo members will be disqualified from office if they do not uphold the HKSAR Basic Law and honor the pledge of allegiance to the SAR.

Based on the decision, the Hong Kong government disqualified four members of the Legislative Council, who were earlier barred from running for the seventh-term legislative election, for failing to meet the legal requirement.

Over 100,000 Hong Kong residents had already signed an online petition in support of the decision around four hours after its announcement.

At the news conference, Lam said a constitutional matter such as this could only be resolved by the nation's top legislative body.

Lam denied that the decision was related to the lawmakers' intensified filibustering tactics in the legislature. The government would not disqualify lawmakers as a result of the parliamentary tactics they adopted, she said.

Shortly after the decision, 15 opposition lawmakers announced their resignation from office. In response, Lam said the rest of the lawmakers would not become a "rubber stamp "of the government as some people assumed. She said that, due to the ongoing pandemic situation, the government would not hold by-elections to fill the vacancies caused by the collective resignation.

Andrew Leung Kwan-yuen, president of the Legislative Council, said he understood and respected the decision made by the Standing Committee of the NPC, and he urged people from across the political spectrum in Hong Kong to take a pragmatic approach and work for the best interests of the community.

Lau Siu-kai, vice-president of the Chinese Association of Hong Kong and Macao Studies, said the decision clearly showed the central government's strong determination to restore order, as well as ensure the resolute, full and faithful implementation of the "one country, two systems" principle.

He said that the lawmakers who took part in the collective resignation should not raise any false hopes that they could force the central government to back down.

Lawmaker Alice Mak Mei-kuen said the decision was entirely constitutional and lawful. Mak urged the opposition lawmakers to understand that without "one country", there would not be "two systems".