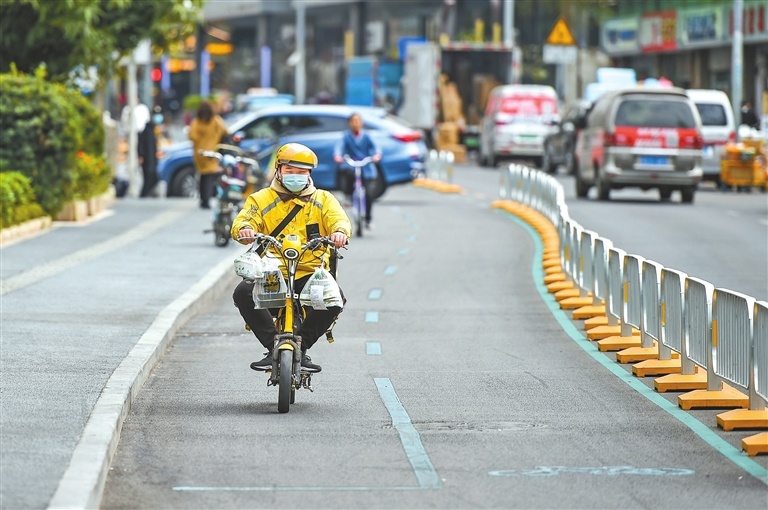 Recently the nonmotor vehicle lanes marked in blue have shown up on Zhenzhong Road and Hongli Road, Futian District, marking the improvement of traffic facilities for nonmotor vehicles in the city, according to the Daily Sunshine.

As of now, a total of 17.3 kilometers of such lanes have been completed, including the one on Zhenzhong Road and a section of about 8 kilometers on Hongli Road.

For a long time, Shenzhen has suffered from serious traffic jams with the mixed traffic of pedestrians, e-bikes and motor vehicles on some vehicular roads, as it has the highest density of motor vehicles and an increasing number of e-bikes due to the fast development of industries such as takeout and express delivery services.

According to the data of the local traffic authority, there are 200,000 to 300,000 e-bikes in the services of takeout and express delivery companies, among others in the city. Due to the lack of sufficient lanes for nonmotorized vehicles, there exists the mixed traveling of pedestrians, bikes, e-bikes and motor vehicles. This has seriously affected the traveling of all parties, especially posing a danger to deliverymen.

Some takeout platforms have interviewed their deliverymen in the city 22,816 times, and based on their responses, 50 suggestions on improving the key roads have met with rapid responses from the local traffic authority.

As a matter of fact, a traffic development plan for bikes in the city for the period from 2021 to 2025 was released last September, specifying that the proportion of roads (excluding expressways) for bikes in the city will be increased from 11.2 percent to 30 percent and then 50 percent by 2025 and 2035, respectively.

“This is also the requirement for ensuring the right of way for nonmotor vehicles,” Wang Qiaoyun said in her proposal.