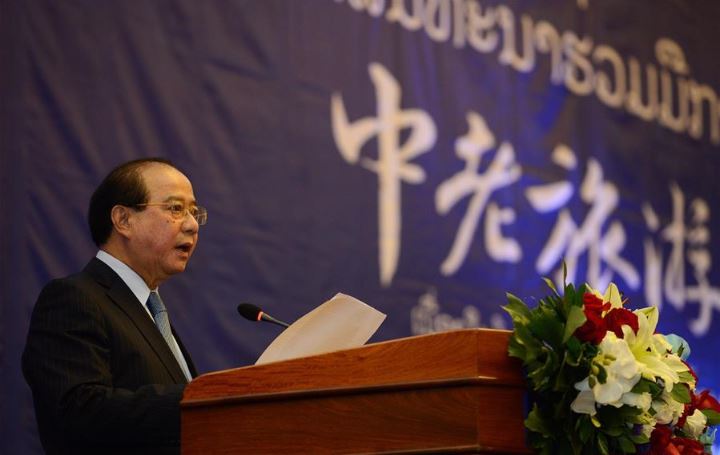 Bosengkham Vongdara, the Lao Minister of Information, Culture and Tourism, speaks at the 2018 China-Laos Tourism Cooperation Forum held in Lao capital Vientiane on May 15, 2018. (Photo: Xinhua)

Lao Minister for Information, Culture and Tourism Bosengkham Vongdara has signed a plan for the Visit Laos-China Year 2019 program.

It was proposed that the opening ceremony for the program will take place in capital Vientiane, to feature cultural shows by Lao and Chinese troupes along with Lao and Chinese food fairs, and a photo exhibition.

High-level officials from both countries will be invited as guests of honor to the opening event, according to the plan.

"The plan could be revised in line with recommendations made by the prime minister," Soun said.

The two countries plan to hold a meeting to discuss tourism management later this year in Champassak province of southern Laos.

A Mid-Autumn festival has also been suggested in September in the World Heritage Site of Luang Prabang and in Vientiane, which would feature performances by artists from China.

According to the submitted plan, the two sides will also arrange Lao Culture Week in Changsha, the capital city of China's Hunan province. The event will feature stage shows by Lao artists, a Lao food fair, a tourism exhibition and a seminar to promote Lao and Chinese tourism.

A similar Lao Culture Week will also be organized in Chengdu, the capital of China's Sichuan province. However, the dates for these culture weeks have not yet been decided, said the report.

In his submitted plan, Minister Bosengkham also suggested that the Lao government consider waiving the need for a visa or reducing the visa fee for Chinese visitors in 2019 and to make it easier for Chinese tourists to pass through immigration when entering and leaving Laos.

He urged the government to consider ending inappropriate inspections and charges along roads and at tourist sites. The minister also called for the cancellation of a regulation that requires tour operators to obtain a permission certificate before bringing in tour groups.