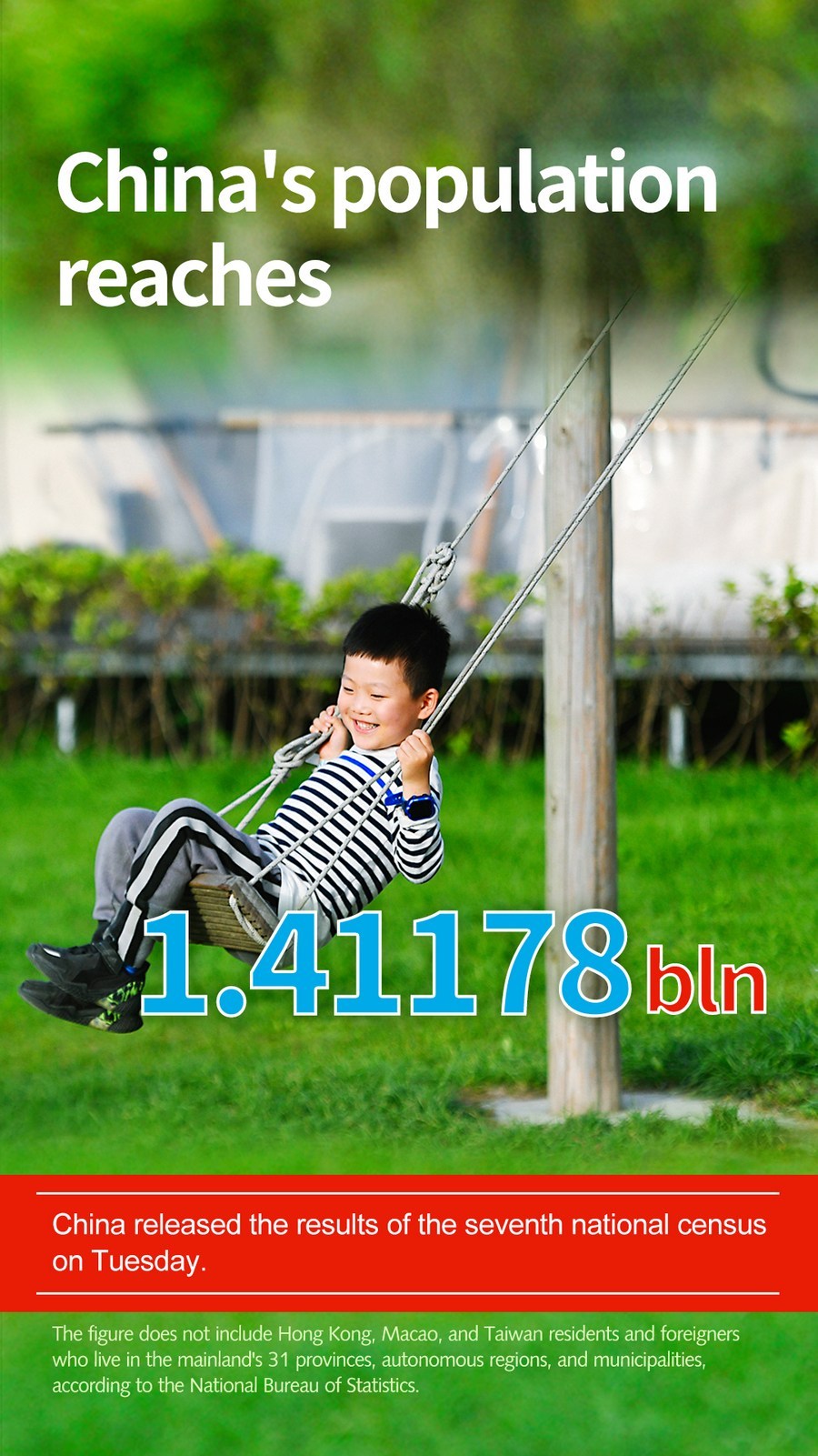 China's most recent national census data have revealed the demographic changes and trends of the world's most populous country, offering strong statistical support for its efforts in advancing high-quality development.

China's population on the mainland maintained steady growth, reaching 1.41178 billion in 2020, an increase of 5.38 percent from 2010, the National Bureau of Statistics (NBS) said Tuesday.

Between 2010 and 2020, the education level of China's citizens improved continuously, the gender ratio became more balanced, changes in family-planning policy led to a rebound of new births, population mobility increased and the urbanization rate further elevated, the census data show.

Ning Jizhe, head of the NBS, told a press conference that such major changes reflect the historical course of economic, social and demographic development, but the census data also point to challenges that the country will be actively addressing.

China maintains its position as the most populous country on the planet, with its population on the mainland accounting for about 18 percent of the world's total.

"China's advantage as a super-large domestic market will exist for a long time," said Ning.

He attributed the basically steady growth over the past decade to China's large population base, which has ensured more than 10 million newborn babies every year, as well as a shift to the two-child policy, which resulted in a rebound in the number of births.

Over the past decade, China accomplished positive achievements in vigorously developing higher education and eliminating illiteracy among young adults.

The number of people who had received or were receiving college-level education reached 218.36 million in 2020, while the illiteracy rate declined to 2.67 percent from 4.08 percent in 2010.

The country also made steady progress in promoting new urbanization, with 901.99 million people living in urban areas on the mainland, accounting for 63.89 percent of the total population.

There were also changes in the data-collection methods used in the census last year.

Electronic data collection was adopted for the first time, allowing real-time reporting. Residents were also allowed to document their information online themselves.

Big data and cloud technology, services and applications were used in data processing, improving the efficiency and quality of the census.

As China enters the 14th Five-Year Plan period (2021-2025), the country has to cope with various issues in order to achieve high-quality growth, including a slower rate of population growth and an increasing elderly population.

Ning said the slight decrease in the annual growth rate was due to a mix of factors, including a continued drop in the number of women of childbearing age, couples delaying having children, and the rising cost of childbearing and parenting.

"This is an objective outcome of China's economic development, particularly as the country's industrialization and urbanization reaches a certain stage," he said, noting that it is a universal issue and particularly evident in developed countries.

He expects China's population to stay above 1.4 billion "for a certain period in the future," citing positive factors that will continue to support future growth.

"China's population will peak in the future, but there remains uncertainty as to exactly when it will happen," Ning said.

According to the latest census data, Chinese people aged 60 or above accounted for 18.7 percent of the country's total population in 2020, 5.44 percentage points higher than in 2010.

An aging population is an important trend of social development, and it will be China's basic national condition for a long time, said Ning.

He said China's increasing elderly population will reduce supply in the labor force, while increasing the burden on families' elderly care and the pressure on the supply of basic public services.

But it can also promote the development of the "silver economy," expand the consumption of products and services for the elderly, and boost technical advances, he said.

China will make overall plans and take specific measures to address its aging population as a major national strategy now and for a period of time in the future, said Ning, adding that in-depth data analysis will be carried out to provide statistical support for policy-making.