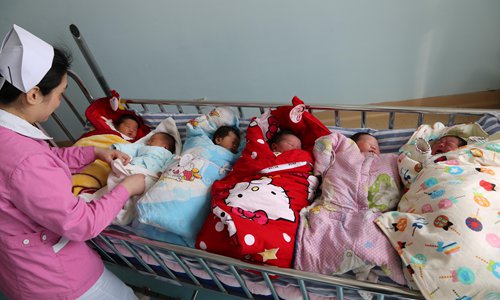 A nurse attends to newborn babies at a hospital in Xiangyang, Hubei Province （Photo:Global times)

The family planning policy came under the spotlight at China's annual political meetings this year, known as the "Two Sessions," as many lawmakers and political advisers proposed further relaxing the policy or abolishing it completely to encourage more births.

The proposals were submitted amid a reshuffle of agencies under the State Council, which saw the family planning commission dismantled and the national health commission established in a move to promote the Healthy China initiative and ensure the delivery of comprehensive lifetime health services for the Chinese people, according to a document on the State Council institutional reform plan.

Relaxing the rulesZhu Lieyu, a National People's Congress (NPC) deputy and lawyer from the Guoding Law Firm in Guangzhou, South China's Guangdong Province, proposed that China allow all couples to have a third child, as the number of births in China declined last year. Data released by the National Bureau of Statistics showed there were 17.23 million births in 2017, two years after China allowed all couples to have a second child, or a drop of 630,000 compared to the previous year.

government organs responsible for managing family planning if China's average fertility rate fails to reach 1.8 births per woman this year. If the total fertility rate does not increase two years after China abolishes the policy, the country

should introduce other policies to encourage more births, Zhou wrote. China's national fertility rate was 1.7 births per woman in 2016, according to data released by the then National Health and Family Planning Commission. However, according to China's family planning development plan set for 2016 to 2020, the country's total population is estimated to reach 1.4 billion by 2020, with its fertility rate reaching around 1.8. Zhou added that the number of first children of couples born in 2017 was 1.2 million fewer than in 2016, which showed that young couples were reluctant to have children. Zhou's proposal to abolish the family planning policy was welcomed by Xiong Sidong, NPC deputy and President of Suzhou University, who wrote in his proposal that the country should also take supporting measures after the country

abolishes the family planning policy, including building more kindergartens, training more pediatricians and extending maternity and paternity leave, according to the NPC website. End of an eraLiang Zhongtang, a former expert with the former National Population and Family Planning Commission and a research fellow at the Shanghai Academy of Social Sciences, told the Global Times that the institutional reform of the State Council and proposals from NPC deputies indicated that the family planning policy is likely to end. "It's actually moving toward the brink of being abolished. As the family planning commission was first merged with the then Ministry of Health in 2013, it will no longer exist after this year's reshuffle," Liang said. Huang Wenzheng, a demographics expert, echoed Liang's views. He said that further relaxing the policy, such as allowing three children for each couple, would be meaningless in terms of reversing the current low birth rate in China. "The sharp decline of new births in 2017 came earlier than most experts predicted, and in the coming years, China will witness a drastic reduction in the numbers of pregnancies, which will further drive down the number of new births," Huang said. According to him, China's relatively high birth rate in the past two years was partly due to the two-child policy, which allowed couples to have two children for the first time since the end of 1970s, and partly because young people born in the baby boom around 1985 have entered childbearing age.