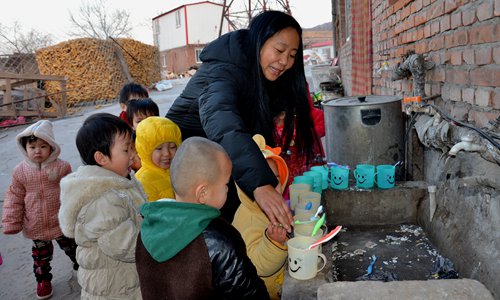 When the doors of the Love Village orphanage were closed on May 6, only a few clothes and quilts scattered on the floor of a white temporary house indicated that children had once lived there. The 71 children who had lived there have been relocated to 21 local hospitals for health checks, and will come under "united management," the government of Wu'an in North China's Hebei Province said in a statement. The Love Village was ordered to shut down after its owner, a high-profile millionaire, was detained on May 5 for alleged gang-related blackmail. This is just the latest in a series of scandals involving private orphanages. In 2013, seven children died in a fire that broke out in a private orphanage in Lankao county, Central China's Henan Province. Such cases have highlighted China's inadequate children's welfare system as well as insufficient government and public supervision over private orphanages. Independent kingdomIn an article published by the Wu'an government on its WeChat account, the Love Orphanage, run by Li Lijuan, a 48-year-old woman, was referred to as an "independent kingdom," after Li repeatedly refused to cooperate with local civil affairs departments to move the children to public institutions or to allow police to collect blood samples and fingerprints from them. Li extorted 300,000 yuan in one month from a hospital, a hotel and an enterprise, and threatened to organize the children in her orphanage to create trouble for them and even organized a gang to obstruct construction work, according to the Wu'an government.

Li has reportedly accumulated a fortune through the orphanage. Li bought several apartments in Wu'an and other cities in Hebei, and her bank account was found to have over 20 million yuan. In 2017 alone, she received 1.27 million yuan in government subsidies. "Li's case had a significant negative influence on society, as her misconduct greatly undermined public confidence in charities," Wang Hongwei, a professor at the School of Public Administration and Policy at the Renmin University, told the Global Times. The case reflected the loopholes that exist in government supervision over non-governmental organizations, Wang said. "The civil affairs department in the case was only responsible for approving and registering the social organizations, but failed to take further actions in follow-up supervision over their operation," Wang said. China's charity sector has been plagued by frauds and scams in recent years. "The fundamental solution to charity fraud is information disclosure. All the parties involved including the donors, charity organizations and recipients have the right to know the details of such donations," Wang Ming, a leading expert on NGOs and civil society in China and dean of Tsinghua University's NGO Research Center, told the Global Times. Annual donations to registered charities in China soared from 10 billion yuan to 100 billion yuan over the past decade, the Xinhua News Agency reported in 2016. China adopted its first Charity Law in March 2016, which provides for regulation over the responsibility of charity groups to disclose information including reasons for raising money.Wang Hongwei also pointed out that corruption may also be involved in such charity fraud cases. Gang-related crimes are often related to protection offered by local governments. In Li's case, the local government should also be put under investigation, Wang Hongwei said. Inadequate welfare"What will happen to those children who previously lived in the Love Orphanage? Hospitals can only provide a temporary shelter for them, but in the long term, they need a proper place to live and schools to attend," Wan Daqiang, a Beijing-based lawyer specializing in child protection, told the Global Times. According to the China Child Welfare Policy Report issued by UNICEF in 2016, China had a total of 511,000 orphans by the end of 2015, and only 89,000 of them were under institutional care. "Civil affairs departments should send their staff to inspect private orphanages regularly or even allocate some to work in such orphanages," Wan said. He added that to ensure children of school age receive an education, the government should also help private orphanages introduce qualified teachers.