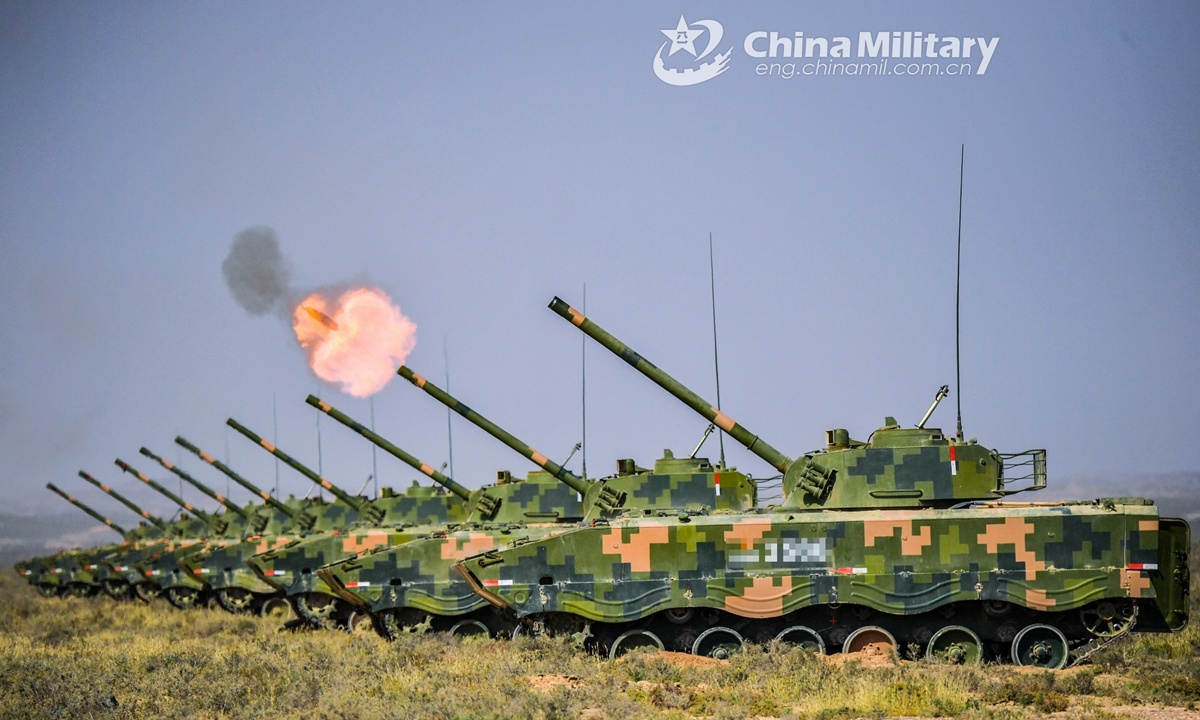 Armored vehicles attached to a combined arms brigade under the PLA 73rd Group Army stand abreast while conducting a slovo of shells during a live-fire test on October 7, 2020. (Photo: eng.chinamil.com.cn)

The US is making another arms sale to the island of Taiwan, featuring aerial drones and anti-ship missiles, a day after it moved ahead with the sales of a truck-based rocket launcher, long-range air-to-ground missiles and F-16 sensor pods.

The weapons would give Taiwan the ability to attack, but are not considered technically advanced, and cannot change the advantage of Chinese People's Liberation Army (PLA) over the island, experts said on Wednesday.

As a type of armed reconnaissance drone, the MQ-9 is not a stealth aircraft, and flies at a low speed and altitude, and the PLA can easily shoot it down with its air defense systems, Fu Qianshao, a Chinese military aviation expert, told the Global Times.

It is a weapon used against less capable armed forces without adequate air defense capabilities, and cannot stand up against the PLA, Fu said.

According to open data, the Harpoon missiles' range varies between 90 and 240 kilometers based on its variant, which was not specified in the Reuters report.

The Harpoon missile initially entered service in 1977, and flies at a sub-sonic speed without stealth capability. It is easy to intercept, and not much more advanced than Taiwan's own Hsiung Feng II and Hsiung Feng III missiles, mainland experts said.

Three other types of weapons, namely a High Mobility Artillery Rocket System (HIMARS) truck-based rocket launcher, SLAM-ER long-range air-to-ground missiles, and external sensor pods for F-16 jets that allow the real-time transmission of imagery and data from the aircraft to ground stations, was submitted to the US Congress previously, Reuters reported on Monday.

HIMARS can launch rockets and missiles that reach a range of between 70 and 499 kilometers, with the ability to conduct maritime operations, according to Lockheed Martin.

HIMARS is a very aggressive weapon with high mobility. So if a war breaks out, the PLA should note its presence, locate its position via reconnaissance, and destroy it as soon as possible, analysts said.

SLAM-ER is considered a variant for the air-launched Harpoon, with a maximum range of 250 kilometers. Mainland experts noted that this attack weapon will give the island the capability to attack from outside hostile defense zones. However, it is questionable how Taiwan can use it, because Taiwan's F-16 fighter jets would require modification to use this missile, and the P-3C maritime patrol aircraft, which can carry the missile, would be too slow and incapable of penetrating any defense.

The sensor pods for F-16s could enhance Taiwan's reconnaissance capability and guide attacks for the previously mentioned missiles and rockets, analysts said, noting that during wartime, Taiwan's limited F-16s would be shot down, or cannot take off due to PLA strikes on airfields.

On a tactical level, the PLA will pay close attention to these weapons and minimize their effect on the battlefield. On a strategic level, they will not change the balance of military strength between the PLA and the island's military, mainland experts said.