Laureates of 'Nobel Prize of China' announced, recognized for coronavirus studies and impact on COVID-19 fight 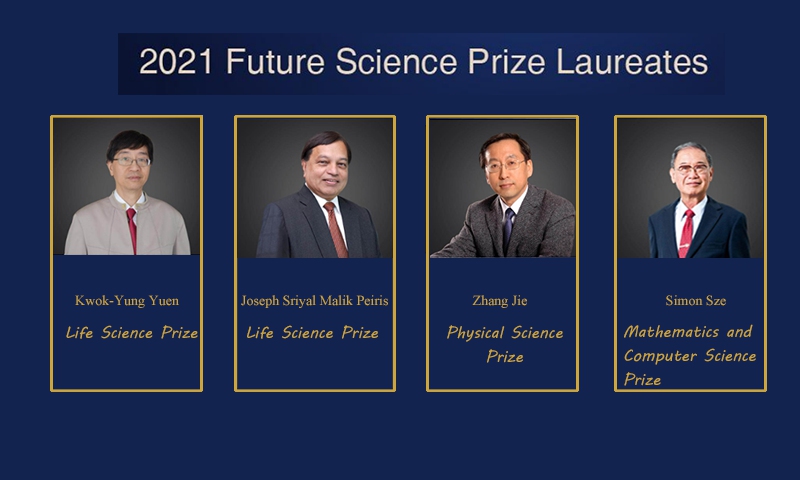 Hong Kong-based scientists Kwok-Yung Yuen and Joseph Sriyal Malik Peiris won the prize in life sciences in the 2021 Future Science Prize, dubbed "China's Nobel Prize," for their major discoveries of SARS-CoV-1 as the causative agent of the global SARS outbreak in 2003 with impact on combating COVID-19 and emerging infectious diseases, the award organizer announced on Sunday.

The Future Science Prize is a privately funded science honor established by a group of renowned scientists and entrepreneurs in 2016, aiming at recognizing scientific breakthroughs and innovations in China with long-term significance to the world. The prize is given in three categories with $1 million for each award, namely the Life Science Prize, Physical Science Prize and Mathematics and Computer Science Prize.

Yuen, from the University of Hong Kong, told the Global Times in an exclusive interview on Sunday that "this is one of the most important prizes not just in China but also internationally. I am really honored and grateful to get the recognition of the very eminent scientists of the selection committee for the prize."

Wang Xiaodong, one of the reviewers of the award, said at Sunday's press conference that "Chinese scientists were able to quickly identify the cause of the COVID-19 pandemic thanks to their contributions."

When asked how their discoveries affect people's understanding of the cause of COVID-19, Yuen explained that since he and his team discovered in 2005 that the horseshoe bat was the natural animal reservoir for the ancestral SARS-CoV-1, they believe that SARS-CoV-2 "also went from bats to another mammal(s) before jumping into humans."

Moreover, SARS-CoV-2 replicates very well in both bat and human intestinal organs, which further supports the bat origin of SARS-CoV-2, he said.

But there are also major differences between the two diseases, Yuen noted, in terms of "disease severity, asymptomatic or mildly symptomatic rates and the ability of the virus to suppress interferon and inflammatory responses."

As world scientists call for the second phase of the coronavirus origins study, experts from the Chinese Center for Disease Control and Prevention have suggested that investigations should be carried out in countries where horseshoe bats and pangolins reside, those with virus-positive animal data and which supplied Wuhan Huanan seafood market through cold-chain logistics, as more tests and molecular viral research suggest it is possible that the early outbreak in the Huanan market may have been sparked by cold-chain imports.

Jin Dongyan, a professor at the School of Biomedical Sciences at HKU, told the Global Times on Sunday that Yuen and his research team where a group of world-leading researcher are gathered are very valuable to the Hong Kong Special Administrative Region. "From SARS to COVID-19, the team has been engaged in coronavirus-related basic studies while combing through clinical studies. That working mode contributes the outstanding work of the university to the study of infectious diseases," Jin said.

(Photo: A screenshot from http://www.futureprize.org)

Yuen and his research team are devoting their efforts to find out how to prevent potential re-emergence of a SARS and COVID-19-like public health crisis. Studies on the types of coronaviruses that exist in bats, the potential hosts of the cross-species transmission, as well as how human transmitted the virus to animals are part of their research, Jin said.

Yuen also told the Global Times that he is working on many areas from the pathogenesis of the coronavirus to antivirals and vaccines. "My part of the awarded prize will go back to the HKU for teaching and research purposes," he added.

Apart from Kwok-Yung Yuen and Joseph Sriyal Malik Peiris, Zhang Jie, a professor at Shanghai Jiao Tong University, won the Physical Science Prize for his development of laser-based fast electron beam technologies. Simon Sze from the "National Chiao Tung University" in the island of Taiwan won the prize in mathematics and computer science.

The science committee of the prizes, composed of 23 outstanding scientists, is at the core of the award selection. Mau-Chung Frank Chang, chairman of the committee, said that the nomination and selection of the prize was established in accordance with the Nobel Prize system, in which the committee invites international experts as nominators and then solicits evaluation letters from experts in relevant fields of the nominated work. Based on the evaluations, the committee then votes to select the final award winners.

In the previous five years, 20 winners were awarded the Future Science Prize, all of whom have been widely recognized both in scientific circle and the society. The late Yuan Longping, known as "the father of hybrid rice," was awarded the Life Science Prize in 2018 "for pioneering the use of hybrid vigor to achieve higher yield and increased stress resistance in rice."