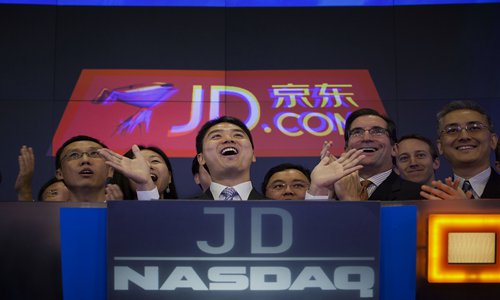 Richard Liu Qiangdong (center), founder and chairman of JD.com Inc, applauds during an IPO ceremony at the NASDAQ MarketSite in New York on May 22, 2014. (Photo: VCG)

The civil lawsuit filed against Richard Liu Qiangdong, founder of Chinese e-commerce giant JD.com, for alleged rape, will not land Liu in jail and only has the theoretical possibility of winning, said a US legal professional. The lawsuit seeks $50,000 in damages. It was filed by a University of Minnesota student Liu Jingyao on Tuesday US local time, where she alleged that she was raped by the founder of JD.com in August 2018, New York Times reported.   The alleged incident took place when Liu Qiangdong was taking a week-long course at the university while Liu Jingyao was a volunteer in that same program.She said the traumatic experience compelled her to withdraw from all of her classes in the fall semester and seek professional counseling.However, Liu Longzhu, a California-based criminal lawyer, told the Global Times on Wednesday that Liu Jingyao has limited theoretical chance of winnning the case, as previous evidence of the case, including witness testimony, is working against her claim. "Unlike the previous criminal prosecution, in such a civil lawsuit, even if Liu Qiangdong fails to defend himself, he will not be sent to jail," said Liu Longzhu, noting that the lawsuit is rather a matter of compensation.For the civil lawsuit, Liu Qiangdong only needs to show up for two occasions - the testimony with the accuser's lawyer and the final sentence hearing, according to Liu Longzhu.  The lawsuit came about four months after Minnesota prosecutors announced not to charge Liu Qiangdong with sexual assault as they "did not find enough evidence to pursue a case" against the 45-year-old Chinese billionaire. Liu Qiangdong's lawyer, Jill Brisbois, said in a statement on Tuesday that they have not yet reviewed the complaint and believe in their client's innocence "based on the county attorney's decision," Reuters reported.