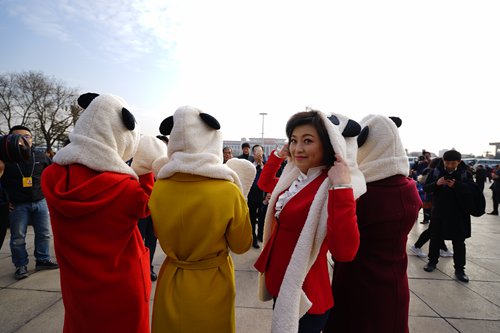 Reporters from Chengdu TV Station of Southwest China's Sichuan Province wear panda hats on Monday outside the Great Hall of the People in Beijing, where the first session of the 13th National People's Congress opened. Chengdu is known as the hometown of pandas. Photo: VCG

A top Chinese lawyer has proposed amending China's Nationality Law in a bid to increase the country's competitiveness of attracting talent, with experts calling for a strict vetting system to guarantee the quality of talent. China should amend Article 9 of China's Nationality Law to allow Chinese of foreign nationality to keep their Chinese nationality, said Zhu Zhengfu, a member of the 13th National Committee of the Chinese People's Political Consultative Conference (CPPCC), Beijing Youth Daily reported on Sunday. The article states, "any Chinese national who has settled abroad and who has been naturalized as a foreign national or has acquired foreign nationality of his own free will shall automatically lose his Chinese nationality.""To automatically revoke his Chinese nationality is to give up talent to other countries, which is not in China's interests in the long run," Zhu said. "Holding a foreign nationality is not the same as being unpatriotic."Zhu said he considers the article outdated and was made when China was weak. "Today's world, especially the developed Western countries, is fiercely competing for talent and resources, and the nationality has become a vital competitive tool," he told media. The advantages of this amendment could outweigh the disadvantages, and it will substantially facilitate overseas Chinese talent to return to China, Zhu Lijia, a professor of public management at the Chinese Academy of Governance, told the Global Times on Monday.Zhu Lijia stressed that to make sure of the quality of overseas Chinese inflow to the country, a vetting system with a clear standard must be established, and China can also consider a further step by opening up dual-nationality policies, even for regular foreigners someday. Zhu Zhengfu also thinks such an amendment could enable China to continue to have jurisdiction over these Chinese in terms of judicial and tax collection-related matters. The 2017 Report on China's Regional International Talent Competitiveness released by the Center for China and Globalization (CCG) says there are over 60 million overseas Chinese, among whom are around four million professionals, mainly in the education, finance and high-tech sectors. Last month, the Ministry of Public Security created a five-year multiple-entry visa for overseas Chinese in order to attract more overseas Chinese talent to work and live in China with greater convenience. Before this policy, overseas Chinese could only get a one-year multiple-entry visa.