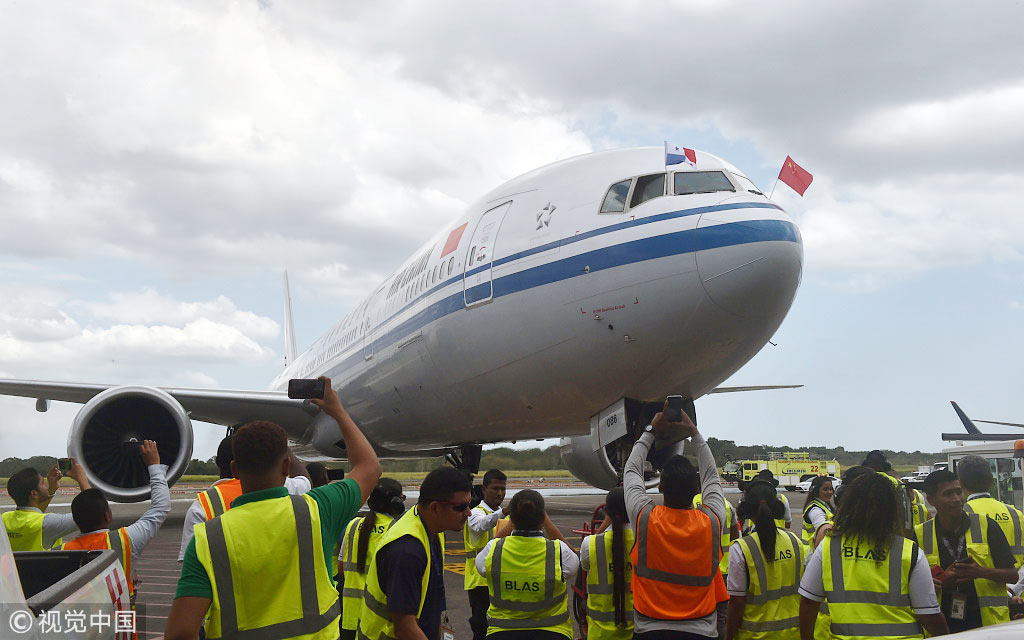 View of the arrival of the first direct flight between China and Panama operated by Air China, which launched its Beijing-Panama flights at the Tocumen international airport in Panama City on April 05, 2018. (Photo/VCG)

President Xi Jinping said he is willing to work with Panamanian President Juan Carlos Varela to strengthen mutually beneficial cooperation in various areas as the two leaders on Wednesday exchanged congratulations on the anniversary of the first year of diplomatic ties.

Xi said he has attached great importance to the development of China-Panama relations, and he is ready to work with Varela to make bilateral ties prosper and benefit the two peoples under principles of mutual respect, win-win cooperation and joint development.

The establishment of diplomatic relations between the two countries in June 2017 opened a new epoch for bilateral ties, Xi said in his congratulatory message.

"During your successful state visit to China in November, we discussed and made plans for the comprehensive development of bilateral ties," Xi said.

The seeds of developing bilateral relations are now blossoming and bearing fruit under the meticulous care of both sides, he added.

Facts have proved that the establishment of diplomatic relations is a correct political decision made with acute foresight from both sides, and the decision has won support from people of both countries, Xi said.

Varela said that the two countries have reached important consensuses and substantial achievements over the past year based on their traditional friendship and existing cooperation programs.

He said the two countries have embraced the historic moment of their anniversary of diplomatic ties, adding he is proud of his involvement in initiating Panama-China relations.

Varela said he will continue to seek to reinforce bilateral ties in extensive areas with full enthusiasm.