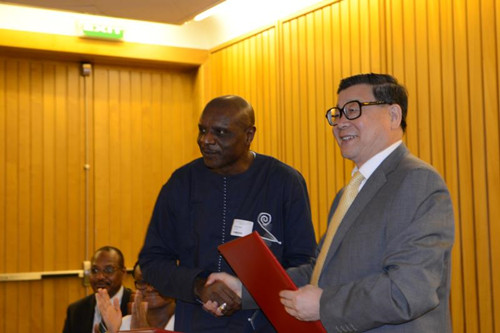 They had five weeks of training which included lion dancing and learning Chinese, calligraphy and papercuts, Wu recalled. "After returning to Africa, they frequently participated in various performances and were highly commended."

"Many young local people reached out and hoped to learn lion dancing," said Wu. "It might have just been five weeks, but the influence on their future will last a lifetime."

China and Africa have actively carried out cultural exchanges and made important contributions to promoting equal dialogue between different world civilizations and safeguarding global cultural diversity, a leading Chinese think tank said in a recent report.

The report, titled "A New Era in China-Africa Friendly Cooperation," was released in Beijing last week.

Jointly compiled by the Institute of West-Asian and African Studies and the Bureau of International Cooperation, both under the Chinese Academy of Social Sciences (CASS), the project consists of one main report "New Achievements, New Opportunities, New Vision" and eight subject reports.

There are many avenues for China and Africa to conduct cultural exchanges and cooperation, said Wu, an executive research fellow at the CASS Institute of West-Asian and African Studies and co-author of the report.

"China has signed intergovernmental cultural cooperation agreements with all African countries that have established diplomatic relations with China," the report says. "An annual implementation plan has been signed, providing an important guarantee for cultural exchanges between the two sides."

Noting that China-Africa cultural exchanges have seen an increase each year, the report says according to incomplete statistics, between 2000 and 2015 a total of 155 Chinese art groups visited Africa while 210 African ones visited China. Mutual participation in each other's art festivals also showcased their colorful cultures.

China has trained a large number of urgently-needed cultural professionals for African countries, says the report. For instance, the Shaolin Temple, the birthplace of Zen Buddhism and a cradle of Chinese kungfu, hosted five training classes for close to 100 cadets from over 20 African countries.