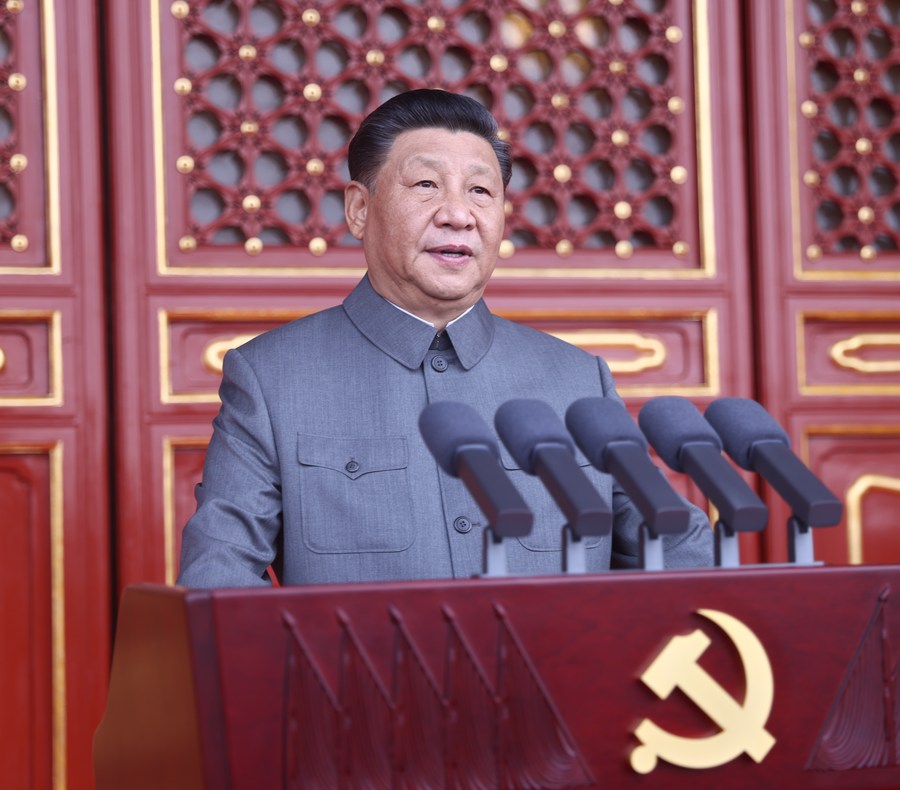 Xi Jinping, general secretary of the Communist Party of China (CPC) Central Committee, Chinese president and chairman of the Central Military Commission, delivers an important speech at a ceremony marking the centenary of the CPC in Beijing, capital of China, on July 1. (Photos: Xinhua)

BEIJING, Aug. 14 (Xinhua) - At the centenary celebration of the Communist Party of China (CPC) on July 1, Chinese President Xi Jinping revealed the secret to the Party's ever-lasting vitality: effective self-supervision and full and rigorous self-governance.

The Party has vowed to keep up the work through reinforcing ideals and convictions of Party members, consolidating its organizations and conducting self-reform.

Xi, also general secretary of the CPC Central Committee and chairman of the Central Military Commission, attaches great importance to reinforcing the firm ideals and convictions of Party members.

On April 25, 2021, when visiting a memorial park dedicated to the Battle of the Xiangjiang River in south China's Guilin, Xi stopped at a painting depicting Red Army officer Chen Shuxiang, who died in the battle during the Long March.

The secret to the success of the Chinese revolution is that "the revolutionary ideals soar above the clouds," and the soldiers stayed firm in the most difficult times, so as to continuously achieve miraculous victories, Xi said.

On many occasions, Xi has led the Party in reviewing history and draw strength from it. He called on all CPC members to carry forward the traditions from revolutionary times, maintain the brave spirit of the revolutionaries, and march toward a brand new journey.

Xi Jinping attends the CPC and World Political Parties Summit and delivers a keynote speech in Beijing, capital of China, on July 6.

The CPC has been consolidating and improving its organizations as well.

The Party has put a comprehensive set of rules and institutions in place to ensure its over 95 million members maintain excellent conduct and act as role models to lead the nation towards rejuvenation.

For example, after the 18th CPC National Congress in 2012, 255,000 work teams and over 3 million cadres were dispatched to station in villages to lead the fight against poverty on the frontlines.

The Party never forgets those who make outstanding contributions. In June 2021, ahead of the CPC centenary, outstanding members of the CPC were awarded the July 1 Medal, the Party's highest honor.

Self-reform was strictly implemented to ensure the Party preserves its character.

In July alone, six high-level Party officials were investigated for disciplinary violations, according to the CPC Central Commission for Discipline Inspection and the National Supervisory Commission.

Discipline violations and misconduct at lower levels were also punished.

In the July 1 speech, Xi said that on the journey ahead, the CPC must remain committed to combating corruption, and root out elements that would harm the Party's advanced nature and purity and any "viruses" that would erode its health.