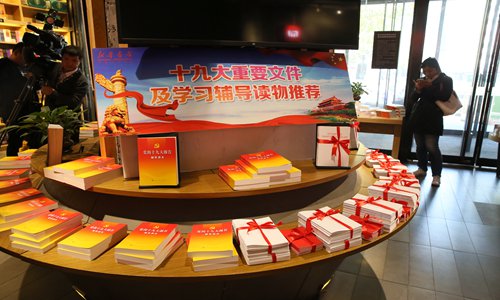 The report delivered by Xi Jinping, general secretary of the Communist Party of China Central Committee, is unveiled to readers at a bookstore in Anhui Province. Photo: VCG

Since last Friday, students at Inner Mongolia University of Science & Technology had one more thing they could do in their spare time: study the thought of Xi Jinping, general secretary of the Communist Party of China (CPC) Central Committee.The university's newly launched "Coordination Learning Center on Xi Jinping Thought on Socialism with Chinese Characteristics for a New Era," located in the school library, will hold regular discussion panels, debates and lectures to promote Xi's thought."We want to give impetus to a wave of enthusiasm on campus to study Xi's thought. Students should become its practitioners and disseminators," Yang Jiaqing, publicity chief and member of the standing committee of Inner Mongolia University of Science & Technology, told the Global Times.The center is one of nearly 50 new research or learning centers dedicated to Xi Jinping Thought that were established in the week following the conclusion of the 19th CPC National Congress. Some were established by universities and others by provincial governments, including the governments of Hainan, Guizhou and Shandong provinces.First raised in a report delivered by Xi at the opening of the congress, Xi Jinping Thought on Socialism with Chinese Characteristics for a New Era has been written into the CPC Constitution and builds on and further enriches Marxism-Leninism, Mao Zedong Thought, Deng Xiaoping Theory, the Theory of Three Represents and the Scientific Outlook on Development.Party officials and experts have agreed that Xi Jinping Thought represents the latest achievements in adapting Marxism to the Chinese context, which can serve to unite the Party in this new era. It is an important component of the system of theories of socialism with Chinese characteristics. 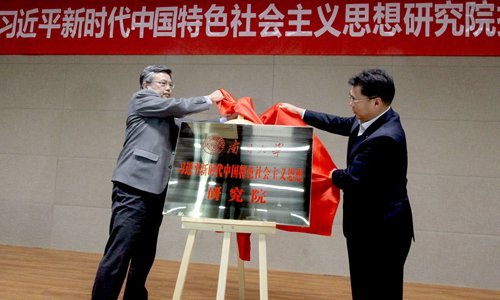 Booming learning centersYang said the decision to establish a learning center on Xi's thought was completely voluntary."We had wanted to establish a learning center for Marxist theories for a long time, and after the 19th CPC congress we saw many universities have built research centers [on Xi's thought]. We applied to our university's Party committee, deciding to follow the latest call and trend and change the name of the learning center to the Center on Xi Jinping Thought on Socialism with Chinese Characteristics for a New Era," he said."From my understanding, Xi's thought is the latest fruit of Marxism in China and marks that Socialism with Chinese Characteristics has entered a new era. It's a political declaration and action guide in this era," he said.Yang said students at the university have been lacking enthusiasm for Marxist theories as they had been fed such courses since middle school. The learning center was aimed to rekindle their interests.Wang Haipeng, who's pursuing a Master's degree at the university's School of Marxism Studies, has been participating in the center's events since its commencement. " Xi Jinping Thought is definitely very important in academia. I believe it will be written into textbooks and be a hot research topic as well," he told the Global Times.The trend to establish research centers on Xi's thought was set by Renmin University of China, which established the first such center on October 25 of this year.Qin Xuan, professor at Renmin University's School of Marxism Studies and director of the research center, said at its opening ceremony that the center's top priority would be to master the essence of Xi Jinping Thought and conduct deeper theoretical research into terms like "new era" and "new contradiction," Guangming Daily reported."The center also has a special mission, which is to help Xi Jinping Thought on Socialism with Chinese Characteristics for a New Era enter textbooks, classrooms and into students' brains," Qin was quoted saying by Guangming Daily.Wu Bo, a research fellow at the Academy for Social Sciences Evaluation under the Chinese Academy of Social Sciences (CASS), is optimistic about the trend."Establishing relevant research organizations shows that these universities are highly proactive in their theoretical awareness," he told the Global Times, adding that Xi's thought has important and realistic significance in guiding China's future, and studying his thought can help solve China's problems and explore China's future.He said the schools' research on Xi's thought should connect more with social realities and should not generalize but target real issues. Establishing such schools is also in line with Xi's latest comments on education. Xi said during a recent meeting with an advisory board of Tsinghua University that constructors and successors of socialism with Chinese characteristics, rather than bystanders or opponents, should be trained through education. 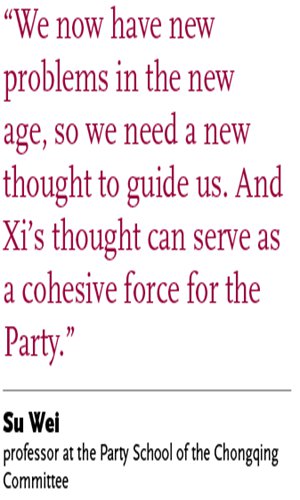 A cohesive forceSu Wei, a professor at the Party School of the Chongqing Committee, told the Global Times that it is necessary for those colleges to set up learning centers on Xi's thought.  "This is a good phenomenon which shows that they are implementing the spirit of the 19th CPC congress.""We need to develop a full understanding of it first before using it properly as a guideline in our work," he said.The emergence of Xi's thought, according to Su, is a demand of this new era. "After the 18th CPC National Congress, the Party needed to answer the questions of this new age. The big question, then, was that after more than three decades of opening up and reform, what kind of socialism with Chinese characteristics are we building. Xi Jinping Thought now answers this question," Su said.In Mao's era, he answered the questions of his time, which was what kind of revolution should China have and how to complete the revolution. His answers formed Mao Zedong Thought, Su explained. He noted that, in recent decades, there have been problems within the Party, such as corruption. "We now have new problems in the new age, so we need a new thought to guide us. And Xi's thought can serve as a cohesive force for the Party," Su said. As many of those newly founded learning centers have declared that they will integrate Xi's thought into their classes in the near future, Su advised that it is better for them to make use of new techniques, such as new media and cartoons, to make the theory accessible and understandable for youngsters. In China's colleges, Marxism-Leninism, Mao Zedong Thought, Deng Xiaoping Theory are compulsory course curriculum for students. Many apps about Xi's speeches can already be found in app stores in China. One of them is "Study China," an app developed by the Chinese Cadres Learning Website under the Party School of the Central Committee of the CPC through which readers can browse many of Xi's books and publications for free. The app also features a map that shows places Xi had visited and the speeches he made there. The app is being promoted among cadres studying in Party Schools nationwide. The People's Publishing House has also published books with the revised Party Constitution, which instantly became a hit in the local book market. The publishing house also launched four books this week that they composed within 10 days to help readers to better understand Xi's report."Xi Jinping Thought is very lively and it has many colloquial expressions that young people will find easy to comprehend," said Su.