CHINA Leaving no suffering for children and no sorrow for parents

Leaving no suffering for children and no sorrow for parents 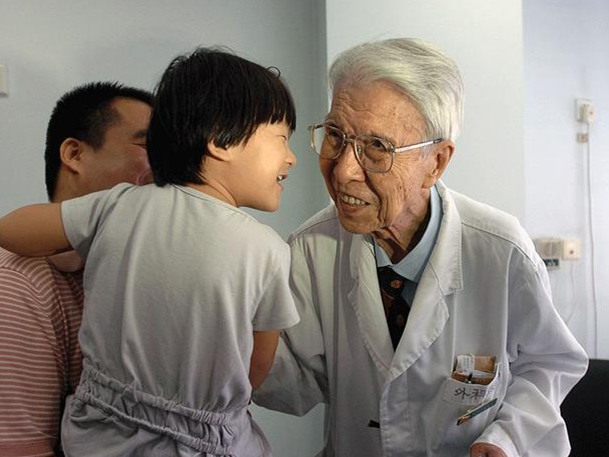 Zhang, now a chief physician in Beijing Children's Hospital affiliated with Capital Medical University, once won the Denis Browne Gold Medal, one of the world's highest honors in the field of pediatric surgery. He shot to stardom in the medical circle when the young man back in 1948 discovered new solutions for subcutaneous gangrene, a deadly infection for newborns.

As the infectious disease was almost invariably fatal at that time, new babies in the hospital died in quick succession, spreading fear among the doctors. Unfortunately, Zhang's own daughter caught the disease as well.

Though he was only a chief resident doctor back then, Zhang dared to challenge the disease with inventive treatment. The first subject for his new operative treatment turned out to be his loved daughter.

"At that time, almost no one supported my idea, but I knew that releasing the bloody and purulent discharge from the affected areas before large-area infections took place could save their lives," Zhang recalled.

He performed an operation on his newborn daughter without hesitation, and it worked.

Word soon got around that an effective solution for the deadly disease was found, making the death rate of subcutaneous gangrene slump from 100 percent to merely 5 percent.

Two years later, Zhang set up the department of pediatric surgery at Peking University First Hospital, marking his fresh start in the once rarely touched field in China.

Striving to provide patients with befitting treatment, he invented or remolded more than 50 varieties of equipment used in pediatric diagnosis and operations, including clamps, membranes and valves named after his own name.

Whenever Zhang receives patients, the elderly always makes genial greetings and warms the stethoscope up by hand before applying the equipment onto the children. In the eyes of most of his young patients, Zhang is more of a sweet old "grandpa."

"A good pediatrician should be one that loves children with all one's heart," said Zhang.

The 101-year-old also sets up a fund by his own income to support sick children who are in need. He would prepare written notes for parents of his patients as a warm reminder of common symptoms for children and relevant therapeutic methods and the like.

"It was my birthday wish that there was no suffering for children and no sorrow for their patients on our planet," Zhang said.