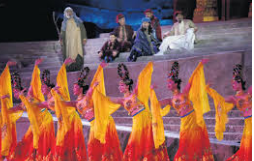 Lebanon's Caracalla Dance Theatre will perform "Sailing the Silk Road" at the National Center for the Performing Arts (NCPA) in Beijing from Thursday to Saturday, the NCPA said Tuesday.

The show is inspired by the fascinating encounter of the civilizations along the Silk Road and historical accounts of heroes, adventurers, thinkers, and pioneers who paved the way for communication in the ancient world and built a bridge of tolerance and understanding between the East and the West, the NCPA said.

This will be the iconic theater's second visit to the NCPA stage, which saw their representative "Two Thousand and One Nights" in February 2016.

Founded in 1968, the Caracalla Dance Theatre is the first professional dance company in the Arab world and has performed in many theatres around the world.

The China Opera and Dance Drama Theater, and the Beijing Dance Academy will take part in the performance this week.