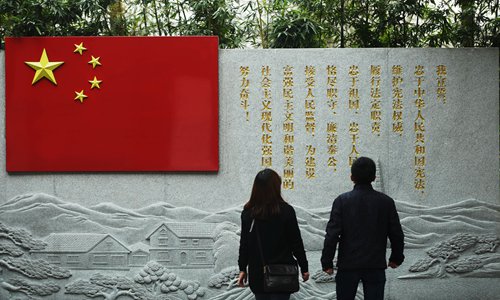 Apart from Party members and government officials, ordinary people across China are showing great enthusiasm in understanding and studying the revised Constitution, the country's most important legal document, after its amendment at the ongoing National People's Congress (NPC). From primary students to retirees, people of all ages in different regions across the country are learning about the legal document in diverse ways, whether via Internet or newspaper or at classes, to understand how their life and work will be related to and affected by the Constitution. For example, in Chiping, Shandong Province, some primary students learned basic knowledge about the Constitution while painting the national emblem during art class. The newly published Constitution has also sold well in bookstores and online bookshops.The amendment is supported by all classes of society and is widely regarded as an improvement and keeping pace with the times, since too many changes have happened to the country since the Constitution was last revised in 2004. The Constitution, revised on March 11, updated 21 articles, including removing the two-term presidential limit and adding "the leadership of the Communist Party of China (CPC) is the defining feature of socialism with Chinese characteristics." Seeing the significance of the Constitution, several NPC deputies proposed enhancing public understanding of the amendment, promoting it in ethnic minority languages and suggested that every family in China have a copy of the book to study.The Constitution has been revised five times since its implementation in 1982 (1988, 1993, 1999, 2004 and 2018) according to the implementation of China's reform and opening up and social development and modernization construction.