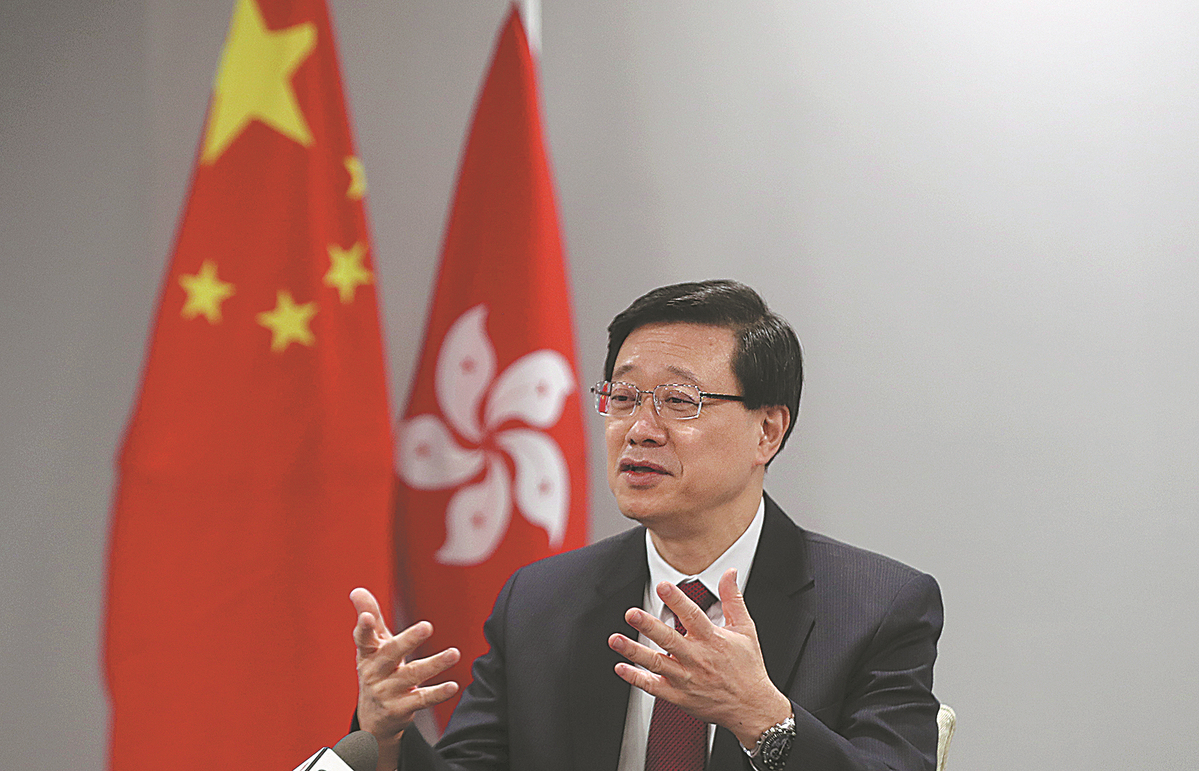 John Lee Ka-chiu, incoming chief executive of the Hong Kong Special Administrative Region, has pledged to make the utmost efforts in the coming five years of his term to build a caring and inclusive Hong Kong.

The coming five years will be a critical time for Hong Kong to maintain stability and seek prosperity, and the new Hong Kong government will focus on developing the economy and improving people's livelihoods so they can benefit from the value the government has created to address the city's long-term problems, Lee said in an interview ahead of the 25th anniversary of Hong Kong's return to the motherland on July 1. Lee will take office on the same day.

"From my perspective, I will be looking at various issues that have been bothering Hong Kong over the years, such as housing, livelihood issues and how people can get jobs, so they can have a very reasonable working and living environment," Lee said.

Regarding housing, the new government will streamline procedures and increase the supply of land and housing. This will be handled by special task forces headed by senior government officials, he said.

The new government will also pay greater attention to youth employment. Traditional education can increase young people's competitiveness, and they can also get vocational training based on their interests, Lee said.

"Young people are encouraged to seek job opportunities on the mainland, especially the Guangdong-Hong Kong-Macao Greater Bay Area. The government will offer them employment funding, subsidies and internships,... and they can also find internships and employment overseas," Lee said.

At the same time, it is important to let young people understand more about history, particularly the ups and downs of the country, so they will be proud of its achievements.

"Knowing the difficulties and hardships that the country went through will make them direct and genuine with their feelings and emotions as Chinese nationals," he said.

To achieve this, the government will do more on providing educational material for them to appreciate the different aspects and moments the country has gone through, Lee said.

It is also important to make young people feel they are part of the successful achievements of the country, such as the mission of sending people to space, he said. Hong Kong universities developed cameras used during space missions, so the city is part of that success, Lee added.

"This togetherness, participation and involvement is something we should be talking more about. We need to feel that we are in the story and we are the contributor to the overall success of the country," he said.

Lee compared the relationship between Hong Kong and the country to the limbs of the body.

"Hong Kong is part of the country. Just like when the body is healthy, you will have healthy hands and legs. When you have strong legs and hands, the body will be healthier," Lee said.

In the past 25 years, the principle of "one country, two systems" has been successfully implemented and Hong Kong has become more resilient and dynamic, he said.

"Every time when faced with difficulties, Hong Kong has managed to solve them and become stronger afterward," he said.

As the "strongest supporter" of Hong Kong, the central government helps the city deal with its problems, he said, adding that the city's rich talent pool, efficient government and overall legal system are also helpful in overcoming difficulties.

Lee said that the new HK government should give full play to the advantages of the "one country, two systems" principle and promote Hong Kong's full integration into the overall development of the country. Hong Kong serves as the bridge between other countries and the mainland and it is also a global metropolis, he said.

"We need to build Hong Kong into a cultural metropolis to bring the mainland and international culture closer," he said.

"While integrating into the overall national development, Hong Kong is not only a contributor, but also a beneficiary, as we can connect our opportunities with those of the whole country, which can be immense. Under the 14th Five-Year Plan (2021-25) and the strategic position of Hong Kong, there are a lot of areas that the city can proceed so it can get the best development opportunities and results."

Everyone will have a clearer understanding that the "one country, two systems" principle is the best systemic guarantee for Hong Kong's long-term prosperity and stability, he added.