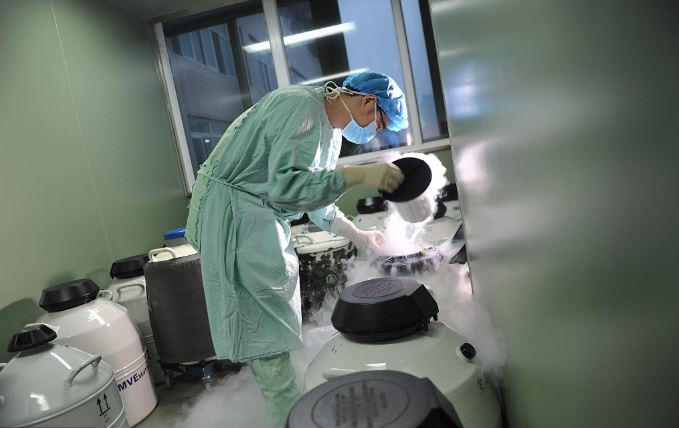 For each baby born through in-vitro fertilization, several extra embryos are frozen for back-up or future use. The number of such leftover embryos is on the rise, and hospitals across China find themselves in a dilemma of how to deal with them.

"The number of leftover embryos increases every year, and we don't have enough room to store these embryos in our hospital," said Yu Qi, director of Endocrine and Reproductive Gynecology Center at the Peking Union Medical College Hospital.

Many other hospitals around the country face a similar situation, with one in Luoyang, central China's Henan Province, having more than 6,000 unused embryos two years ago. And data shows some other hospitals have even lost contact with 60 percent of the patients.

The extra embryos end up being frozen in liquid nitrogen tanks. Although freezing one for a year can cost up to 3,000 yuan (440 US dollars), most hospitals still decide to pay the bill.

"The hospital has a contract with patients, but from a doctor's point of view, embryos are cultivated through various measures and have the potential of becoming human beings," said Yu, adding that "Besides, with the two-child policy, some patients may come back to the hospital for their embryos. So we feel they are something we can't discard."

The contracts signed by patients usually state a time period for keeping the extra embryos at the institution. But many hospitals are still afraid of the legal consequences of discarding them.

"The law in our country hasn't clearly defined the legal status of embryos, and it is incomplete on this issue," said professor Mi Xinli from School of Law at the Capital University of Economics and Business.

According to UK law, embryos can be stored for a maximum of five years. While in the US, different states have different legal definitions of frozen embryos. They can be defined as humans, property, or even something in between.

Professor Mi believes the current situation is influenced by many factors, including law and ethics, so the problem can only be solved step by step.

"In the long term, the country can specify the maximum time period for embryo storage through legislative measures," said Mi, "before that, the solution is through contracts. It's better if the country's health authorities can organize experts from both the medical and legal sectors to draft an exemplary contract, and provide it to hospitals."

While parents experience the miracle of life, law and ethics still need to catch up with technology.