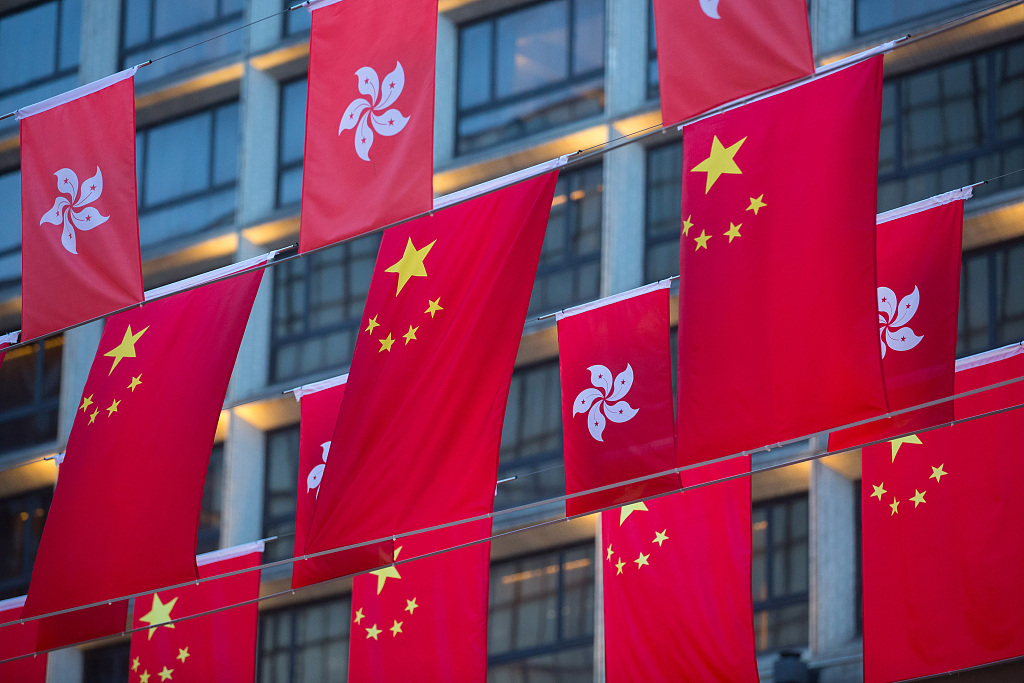 The legal professionals called upon all members of the society to show support for the Hong Kong Police Force in maintaining the rule of law, so as to restore the social order as soon as possible.

Challenge of law never tolerated in any society

The protesters have been deliberately breaking the law during the past two days as the police have clearly objected to the application for the public processions and the Appeal Board on Public Meetings and Processions have also rejected the relevant appeal, said Tony Kan Chung Nin, a member of the National Committee of the Chinese People's Political Consultative Conference and founding chairman of the Association of Hong Kong Professionals.

"In any country or region, if people don't obey the law, the society will fall into chaos," he said, expressing fury at the Hong Kong opposition camp which has been trying to find excuses for the law-breaking behaviors.

Every Hong Kong citizen should obey the law in Hong Kong. The gatherings during the weekend were illegal and nobody should ever have participated in the processions, said Jimmy Ng Wing-ka, a member of the Legislative Council of the HKSAR.

Violence has been escalating during the past month with some people even carrying assaulting weapons. Violence has been overriding the law and is developing into extreme violence, said Maggie Chan Man Ki, solicitor and founding president of the Small and Medium Law Firms Association of Hong Kong.

Some violent radicals have stormed government buildings and assaulted law enforcers, crossing the bottom line of peace, seriously threatening the public security and rule of law in Hong Kong and severely challenging the "one country, two systems" in Hong Kong. These acts should never be tolerated by Hong Kong and the country and should be strongly condemned, said Albert Wu, a practising barrister in Hong Kong.

The rule of law and spirit of law-abiding have been the key to the long-term peace and prosperity of Hong Kong, said Raymond Li, a trainee solicitor in Hong Kong. Born in Hong Kong and having lived here for 30 years, he said every person who loves Hong Kong feels sorrowful that law-breaking behaviors have been taking place in Hong Kong.

"The Hong Kong society has become less civilized and people now are not valuing rational communication as before. Nowadays whoever is more violent becomes the boss. This should never be tolerated," he said.

He called upon all Hong Kong lawyers and Hong Kong citizens to support Hong Kong police in decisively enforcing the law and arresting all law breakers in accordance with the law.

Lawrence Ma expressed sorrow for the undermining of Hong Kong's rule of law, saying, "Hong Kong, renowned for discipline and rule of law, has been harassed by the bunch of mobs for quite a time. It is a disgrace to Hong Kong."

Jimmy Ng said that acts of the illegal protesters have been damaging Hong Kong's legal system and rule of law.

"Knowingly breaking the law would spoil the confidence of Hong Kong residents and the international community in the rule of law of the region," he said.

Ng also blamed the spread of illegal acts on the opposition camp. The opposition, according to Ng, has two motives in defending the illegal rallies: firstly, it eyes elections, hoping to rake in more votes; secondly, it is always keen to challenge the government.

"Behind the scene of the demonstrations, they (the opposition politicians) stir up and help boost the violent protesters' confidence," said he.

Recalling the remarks made by some opposition leaders during the past over one month, Maggie Chan said the comments from the opposition legislators have whitewashed violence, helping it escalate step by step to the level of the committing of arson and possession of assaulting weapons.

"I think those opposition legislators who encourage violence must be held accountable for these violent incidents," she said.

The illegal demonstrations are not merely targeting the proposed amendments to the Fugitive Offenders Ordinance and Mutual Legal Assistance in Criminal Matters Ordinance, but also the administration of the SAR and the principle of "one country, two systems," she opined.

Chan called for more support to police enforcement of the law and zero tolerance of illegal acts.

"Law and politics are both important. Any political appeals must be made within the framework of the law," she said.

Raymond Li was furious about the opposition's agitative political rhetoric to instigate the youth to stage illegal protests and commit violence.

He said that the government and the whole legal profession, on the one hand, must sternly condemn the violent acts, and on the other hand must swiftly sue the suspects according to the crime ordinance.

Speaking highly of the performance of the Hong Kong Police Force, Tony Kan said they have exercised restraint and refrained from excessive use of force and escalation of the conflicts.

"The Hong Kong police are very rational and professional in enforcing the law," he said, suggesting that the police now are totally justified to boost the use of force when facing violent assaults.

Echoing Kan, Jimmy Ng said that while being attacked by violent protesters, the police had issued warnings before taking necessary and appropriate measures of force.

He praised the police for their hardworking and firm attitude, saying, "Many police officers had to be on duty for more than 10 hours a day under such difficult circumstances to uphold social peace and stability."

The whole society should express gratitude to the police for their wholehearted devotion and professionalism, Maggie Chan said, noting that the police are an important force to maintain social stability under the principle of "one country, two systems."

She called on Hong Kong citizens to give full support to the police in strictly enforcing the law, noting that when violent acts escalate, it is even more necessary for the police to fulfil their duties in the utmost efforts in order to bring all offenders to justice.

Hailing the performance of the Hong Kong police, Raymond Li expressed the hope that the police will stand up to the pressure and perform their duties in accordance with the law.

Li also called on the Hong Kong people to support the police with actions to help safeguard Hong Kong's peace and stability.