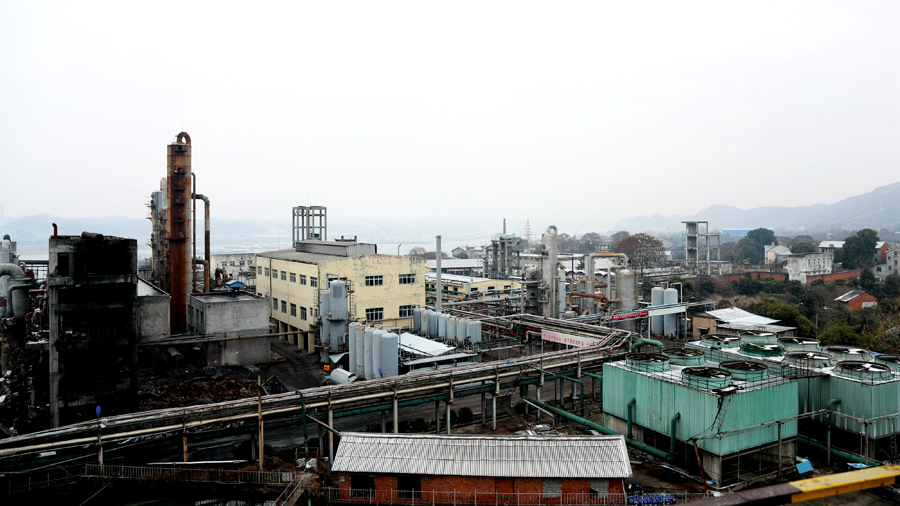 The Tiantian Chemical Plant in Yichang, Hubei province, in January. The facility is pictured after it was closed in response to a plan formulated by the local government to regulate chemical plants along the Yangtze River. [Photo provided to China Daily]

Judicial officials and experts called on China to draft a law protecting the environment and ecology of regions along the Yangtze River to prevent the key area from being polluted further.

"We suggested that China's top legislature, the Standing Committee of the National People's Congress, put the law's draft on its agenda after we received 18 motions of river protection and environmental restoration from deputies since 2012," said Yuan Si, vice-chairman of the NPC's Environment Protection and Resources Conservation Committee.

He spoke about the legislation plan on Monday during the International Seminar on Environmental Adjudication, held by the ClientEarth and the Supreme People's Court.

"The deputies highlighted the significance and feasibility of drafting the law to prevent the river and its region from being further polluted in the motions," he said.

"They also provided several names for the law, such as the river protection law or the law on water pollution control of the area," he added.

"Although the draft-related work hasn't begun, we've decided to take the environmental and ecological restoration as priority or principle in the legislation," he said.

Lyu Zhongmei, head of environmental resources research at China Law Society, said during the seminar the legislation "is a must, no matter what the name of the law is".

She also called on the top court to establish special tribunals as soon as possible to deal with cross-regional environmental disputes to improve the quality of the case hearings, especially those in the region along the river.

"Such advice is ready to be put into practice," said Jiang Bixin, vice-president of the top court.

He said officials are planning to set up in August a new system to integrate the legal resources of the high people's courts in 11 provinces and municipalities along the river.

The system will help the courts share information on pollution disputes and increase interactions on how to solve them among judges, he said.

He said lawsuits on climate change and environmental protection in financial cases will be two major areas to study.

James Thornton, chief executive of ClientEarth, said the legislation for the river region is necessary and they are considering making it a major issue of talks with Chinese judicial officials in the next stage.

ClientEarth is a nonprofit environmental law group that maintains offices around the world, including Beijing.

"How to integrate the legal systems to improve the environmental case hearings is not only important for China, but everywhere," he said.

Chinese courts concluded 20,602 criminal cases related to pollution last year, 190,125 civil disputes and 30,866 administrative lawsuits over both the environment and ecological protection, according to the Supreme People's Court.

A majority of the cases focused on certain key areas across the country, such as regions along the river, the top court said.