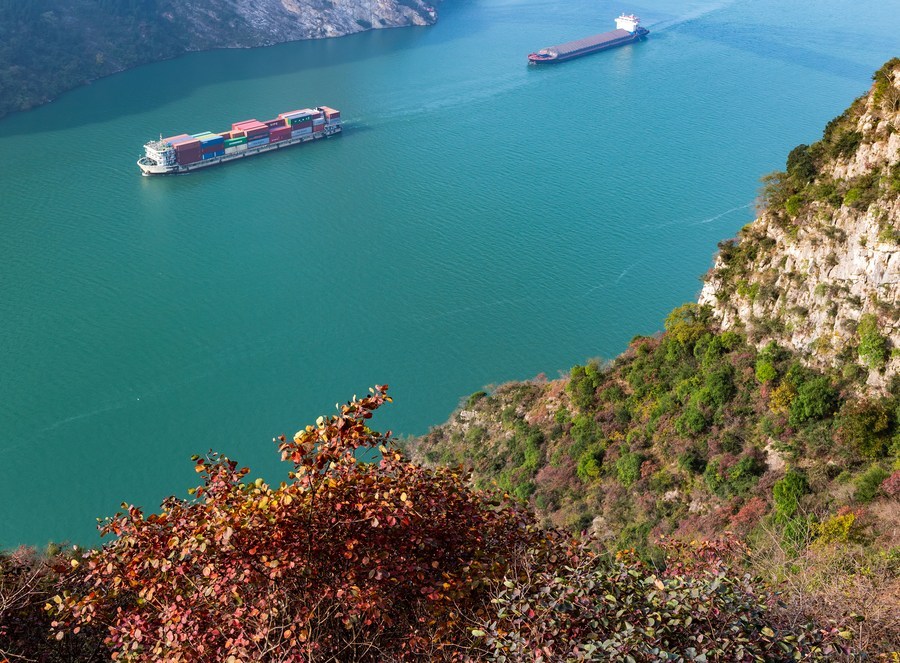 Ships sail through a section of the Xiling Gorge, one of the Three Gorges along the Yangtze River, in Zigui county of Yichang, Central China's Hubei province, Nov 29, 2020. (Photo: Xinhua)

Editor's Note: Starting on Thursday, China Daily will publish a series of stories focusing on major issues expected to be discussed at the annual sessions of the National People's Congress and the National Committee of the Chinese People's Political Consultative Conference, known as the two sessions, the biggest annual political event in China, which generally starts in early March. Some stories will also look at how the participants in the two sessions, deputies and political advisers, perform their duties.

The Standing Committee of the National People's Congress, the country's top legislature, drafted nine new laws and amended 12 others in 2020, even though its legislative work met difficulties amid the COVID-19 pandemic, such as those related to research and visiting rural areas.

"Formulating such a number of new laws within a year has been rare in recent years," said Yue Zhongming, a spokesman for the NPC Standing Committee's Legislative Affairs Commission, adding that many of these dealt with crucial social issues and responded to public concerns.

In June, lawmakers unanimously passed the Law of the People's Republic of China on Safeguarding National Security in the Hong Kong Special Administrative Region, aiming to provide the area with long-term stability and prosperity.

Four months later, the top legislature approved the Biosecurity Law in a bid to improve national security by strengthening biosecurity risk monitoring and early warning as well as risk assessment and information sharing.

Additionally, draft laws on reducing food waste and protecting personal information, two issues that have been topics of heated public discussion, were also submitted to the top legislature for their first review, and will face further amendment this year.

"Deliberating these laws in a timely manner was not only to give stronger legal support to the country's high-quality development, but also to increase people's sense of security, fulfillment and happiness," said Zang Tiewei, another spokesman for the commission.

The NPC Standing Committee generally holds a session every two months to review laws, make legal decisions and receive reports from government or judicial departments. However, it can hold additional sessions if required.

Li Zongsheng, a lawyer from Liaoning province and a deputy to the NPC, said the high level of legislative work last year reflected people's higher requirements in terms of rule of law and contributed to the development of the country's legal system.

He said the legislative schedule "can be adjusted when emergencies or crucial matters occur, such as those closely related to people's livelihoods and social development, because the ultimate goal of legislation is to serve the people and the nation".

Fu Yuhang, an NPC deputy from Sichuan province, agreed, recalling several legislative measures taken last year to prevent the illegal consumption of wild animals and promote public healthcare, saying that these were necessary and played an important role in controlling the COVID-19 pandemic.

Fu attended some of the NPC Standing Committee's sessions in Beijing in recent years, at which she made suggestions on the protection of children and fighting juvenile crime.

"The happiest thing was when some of my advice was accepted by the legislature and was included in amendments to laws on the protection of minors and the prevention of juvenile delinquency," she said.

Although the legislative workload this year will be still huge, "the determination to formulate and amend laws with an open mind and with intense efforts will not be changed", Fu said, adding that holding additional sessions may be a new reality.

In January, the top legislature held its first additional session of the year, at which it reviewed draft laws regarding people's livelihoods and the nation's development, including those on family education and production security.

The 13th National People's Congress will hold its fourth annual session in Beijing starting on March 5.

Apart from the regular work of the session, including reviewing the work reports of the central government and top judicial authorities and discussing the annual budget, deputies at this session will also deliberate draft amendments to the Organic Law of the National People's Congress of the People's Republic of China and the NPC's procedural rules.

The drafts, if passed, will contribute greatly to improving the NPC's work flow, allowing deputies to take part in more legislative activities and further promote the development of the nation's legal system.