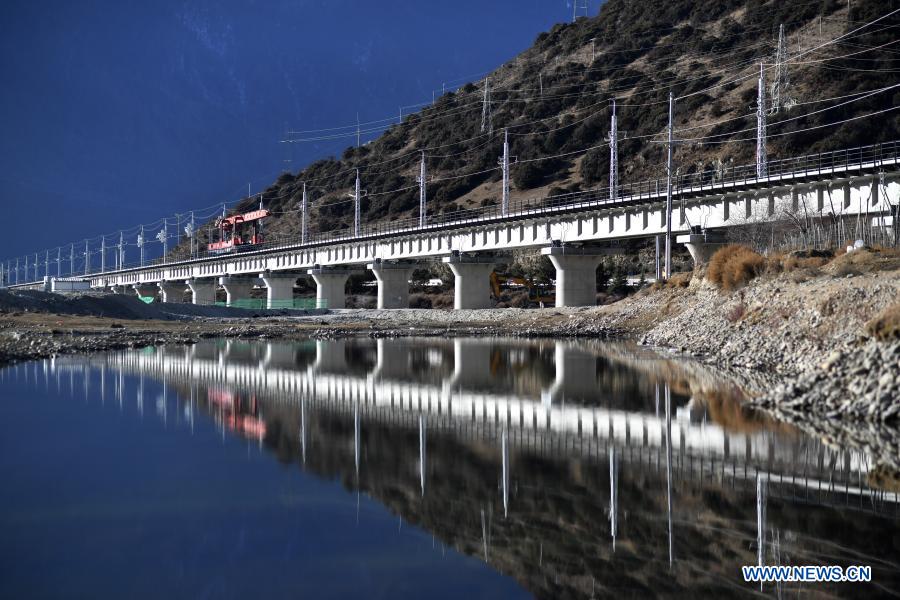 Photo taken on Dec. 28, 2020 shows the construction site of track-laying at a bridge of Lhasa-Nyingchi section of the Sichuan-Tibet Railway in southwest China's Tibet Autonomous Region. (File photo: Xinhua)

With a designed speed of 160 km per hour, the 435-km railway marks the launch of the country's first electrified railroad operating on the plateau region. Fuxing trains powered by both internal combustion and electricity will apply on this route.

With the launch of the service, the Fuxing bullet train series will be available in all provincial-level regions on the Chinese mainland. Trains will pass through southeast Tibet for the first time in history.

The fastest trains can take passengers from Lhasa to the city of Shannan in 70 minutes and to Nyingchi in 3.5 hours. Over 90 percent of the track sits in areas located more than 3,000 meters above sea level.

Construction of the railway started in 2014 and track-laying work was completed by the end of 2020.

The Lhasa-Nyingchi railway is part of the under-construction Sichuan-Tibet Railway that will connect Lhasa and Chengdu, capital of the neighboring Sichuan Province. It also shares lines with the planned railway connecting southwest China's Yunnan Province and Tibet.