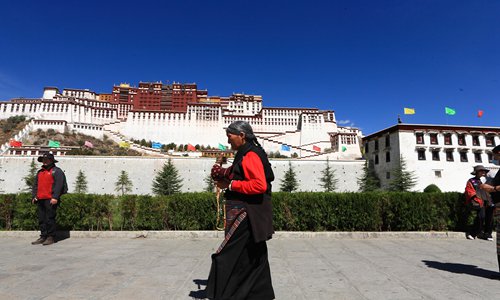 Tourists and locals in front of Potala Palace in Lhasa, the Tibet Autonomous Region. (Photo: VCG)

Lhasa, capital of Southwest China's Tibet Autonomous Region, tops a list of safe Chinese cities as the city boasts of more than 100 police stations that can respond to emergency calls within one minute. A recent blue book published by the Chinese Academy of Social Sciences on the public services in Chinese cities shows Lhasa ranked first among 38 major Chinese cities in terms of public safety, Tibet Daily reported on Friday.Currently the city has more than 100 police service stations that can respond to emergency calls within one minute in core areas and three minutes in other areas, according to the Tibet Daily report.In the counties and townships of the city, local governments have set up mediation centers to resolve disputes among residents, and the centers are playing an increasingly important role in maintaining social stability and enhancing unity.Wang Liang, a senior official of Lhasa Public Security Bureau, said that Lhasa has enhanced people's sense of security through innovative social governance. It has made comprehensive changes to key areas of public security that resulted in annual declines in criminal and public security cases. The sense of security and satisfaction of local residents has reached more than 99 percent, and the number of accidents and deaths decreased 16 percent and 21 percent respectively, according to the Tibet 2019 government work report, which was released in January. Tibet dealt with more than 30,000 cases in 2018, including 25 cases involving inciting separatism or financial crimes which jeopardized national security. In 2019, the regional government vowed to strengthen social governance and maintain social harmony and stability, deepen the anti-separatist campaign and crack down on separatist and sabotage activities, and enhance the border management, according to the work report.