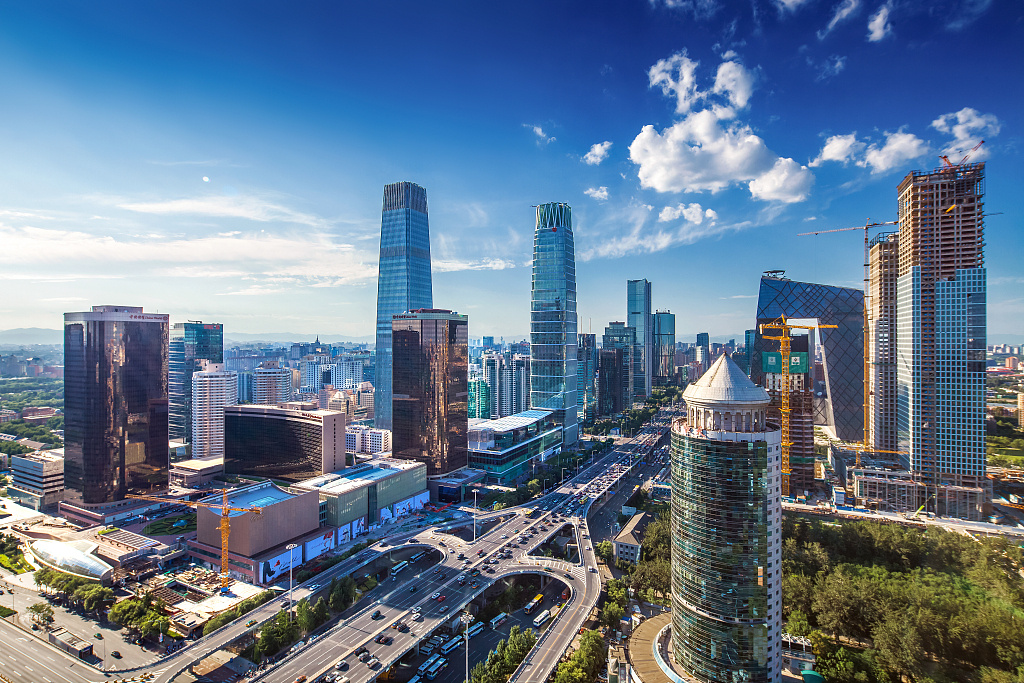 A bird view of Beijing's central business district, which is home to the headquarters of a great number of companies on the Fortune Global 500. (Photo: VCG)

According to the report, implementation of the regulation has achieved positive results in general. Enterprises are highly satisfied with tax and fee cuts and the facilitation of government services, as well as innovative reform measures to facilitate startups and the operation of enterprises. More than 20 million new market entities were established amid tough conditions last year.

"The regulation that took effect last year is aimed at strengthening market-oriented and law-based development. The business environment has considerably improved over the past year. The substantial increase in market entities last year and their ability to weather the difficulties are both attributable to a more just and equitable business environment," Li said.

The report also found that companies had more complaints on issues such as fairness in public bidding, intermediary services and financing convenience. On top of that, progress in implementing the regulation is uneven between the eastern region and the central, western and northeastern regions, as well as between provincial capitals and other cities.

"People's sense of gain comes mostly from reforms of the government management model, including innovative measures like one permit for one sector and one license for one enterprise. The experiences gained shall be further summarized and promoted," Li said.

"There remain considerable gaps between the eastern region and the central, western and northeastern regions, as well as between provincial capitals and other cities, regarding fostering a more enabling business environment. That said, gaps also entail potential. Departments and localities concerned shall identify weak links and improve related work."

Eastern regions and provincial capitals are encouraged to meet advanced international standards and launch pilot trials. Central, western and northeastern regions, as well as non-provincial capital cities, shall accelerate the pace of reform to boost the improvement of their business environment.

"When formulating the 14th Five-Year Plan (2021-25), gaps between different regions in terms of business environment shall be fully taken into consideration. Reform should be further advanced," Li said.

Dedicated efforts shall be made to promote fair competition and market-oriented reform of government project bidding. Compliance oversight shall be strengthened to standardize intermediary services. Investigation and punishment will be enhanced in terms of "hidden red tape" in credit-backed loans that increase corporate financing costs.