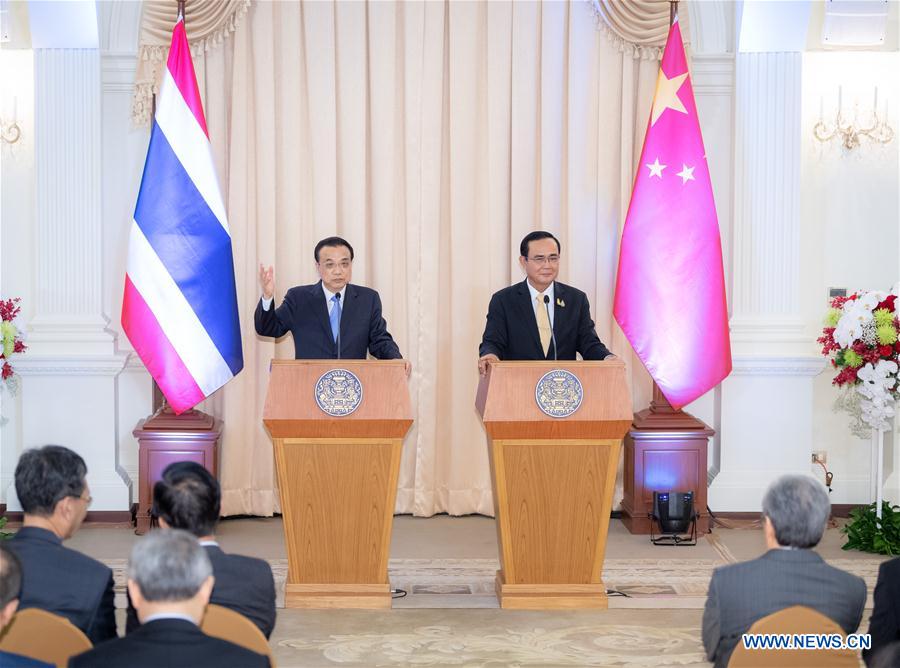 BANGKOK, Nov. 6 (Xinhua) -- As the world is facing rising uncertainties and the global economy is still slowing down, Chinese Premier Li Keqiang's trip to Uzbekistan and Thailand demonstrated China's firm commitment to forging stronger ties with its neighbors and boosting multilateralism for a more open and connected world.

Li finished his fruitful five-day trip on Tuesday. During the past days in Tashkent and Bangkok, the premier expounded China's views on cooperation and openness at a series of multilateral meetings. He also paid official visits to the two neighboring countries of China.

China and its partners agreed to increase mutual trust and continue to expand cooperation so as to better cope with challenges and maintain sustainable global growth.

Meanwhile, member countries of the Regional Comprehensive Economic Partnership (RCEP) have made a major breakthrough in negotiations. It is a clear message that openness and integration remain the mainstream in the world.

Neighborhood diplomacy serves as a key pillar of China's foreign policy, and China regards the Shanghai Cooperation Organization (SCO) and the Association of Southeast Asian Nations (ASEAN) as significant mechanisms for promoting cooperation and stability in the region.

Speaking at the 18th meeting of the Council of Heads of Government of Member States of the SCO in the capital of Uzbekistan, Li said the SCO member states need to enhance unity and mutual trust, enrich the contents of cooperation and jointly address challenges.

He called on all parties to carry forward the Shanghai Spirit and make new contribution to regional and world peace, stability and prosperity.

In the 22nd ASEAN-China, Japan and South Korea (10+3) leaders' meeting, Li made a five-point proposal to help the 10 ASEAN countries and their partners to further unleash potential to seek more substantive progress in the 10+3 cooperation and to steer East Asian cooperation toward higher-quality development.

For China-ASEAN ties, the 10-nation organization became China's second-largest trading partner in the first half of 2019 with a total volume of 288 billion U.S. dollars. Meanwhile, China and ASEAN are major tourist destinations for each other.

As important players in the cooperation within the framework of the China-proposed Belt and Road Initiative (BRI), Tashkent and Bangkok have strong willingness to strengthen cooperation and grow ties in various areas.

China and Uzbekistan signed bilateral cooperation documents in such areas as economy and trade, investment, technology and customs during Li's official visit.

Ravshan Nazarov, a senior researcher at the History Institute of the Academy of Sciences of the Republic of Uzbekistan, said Li's tour is significant for both SCO diplomacy and promoting traditional friendly relations between the two countries.

During Li's official visit to Thailand, the two countries issued a joint press statement, vowing to advance cooperation in many fields including trade and investment, railway, tourism and hi-tech innovation, and agreed to enhance cooperation and coordination in various multilateral platforms.

Negotiations on the RCEP, which comprises the 10 member states of ASEAN and its six partners -- China, Japan, South Korea, Australia, New Zealand, and India, have been in the limelight recently as the 16 members are getting close to a conclusion after seven years' talks.

Li said during the 10+3 leaders' meeting that 15 out of the 16 RCEP participating countries have concluded text-based negotiations and essentially all their market access issues.

That is a major breakthrough in the construction of an East Asia free trade area, which would boast the largest population, most diversified membership and greatest potential for development, said Li.

The RCEP agreement is "intended to further expand and deepen regional value chains for the benefits of our businesses," leaders of the RCEP countries said in a joint statement at a summit here on Monday. They also noted that they have tasked legal scrubbing to start for signing the giant deal in 2020.

If signed, it will become the world's largest free trade zone that accounts for nearly 30 percent of world trade as well as about a third of global gross domestic product.

As for India, which still has "significant outstanding issues" in the negotiations, the Chinese premier said it "is welcome to join the partnership as early as possible."

"China is ready to uphold the principles of mutual understanding and accommodation and work along with countries to address issues in the negotiations with India," he said.

With increasing protectionism threatening global growth and development, concrete actions of all sides are badly needed to facilitate trade and investment, and push forward people-to-people exchanges to make the region more interconnected.

On connectivity cooperation among the SCO countries, Li called on member states to speed up negotiations on connectivity policies, rules and standards and promote the signing of highway and railway plans.

Member states need to forge ahead with the building of connectivity networks, expand trade exchanges and increase regional trade, Li said at the SCO meeting.

After the meeting, Li and the leaders of other member states signed a joint communique and approved a series of agreements and resolutions on SCO trade, railway and digital economy cooperation.

Since the BRI was proposed six years ago, China has actively worked together with its partners to better align the initiative with other national and regional development strategies, in order to boost integration and connectivity.

Prayut said he welcomes more Chinese companies to invest and set up factories in his country, and to conduct cooperation with the Thai side in such areas as e-commerce, third-party market, high-speed railway, 5G technology and digital economy.

During the 22nd China-ASEAN (10+1) leaders' meeting on Sunday, China and ASEAN agreed to make an action plan to implement the Joint Declaration on China-ASEAN Strategic Partnership for Peace and Prosperity (2021-2025), and issued statements on the BRI, smart cities and media exchanges.