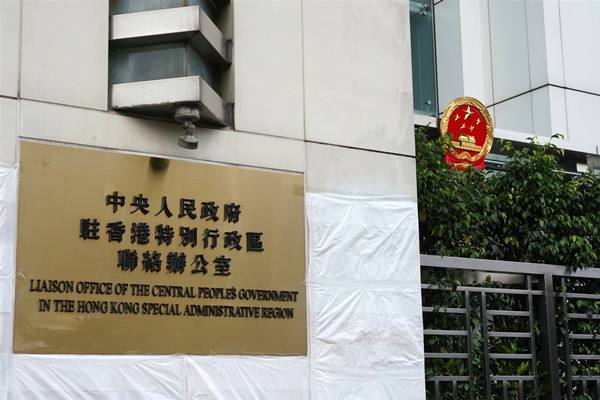 HONG KONG, Nov. 28 (Xinhua) -- The liaison office of the Chinese central government in the Hong Kong Special Administrative Region (HKSAR) issued a statement Thursday expressing the utmost indignation and condemnation against the U.S. signing the so-called Hong Kong Human Rights and Democracy Act of 2019 into law.

Ignoring continuous radical and violent crimes in Hong Kong over the past five months or so, the U.S. Congress and some politicians, who have acted in the disguise of supporting "human rights" and "democracy" in Hong Kong to make remarks that confused right and wrong and confounded black and white, approved the so-called Hong Kong Human Rights and Democracy Act of 2019 at the House of Representatives and the Senate.

Ignoring stern representation and strong opposition from the Chinese side, the U.S. side has now signed the act into law. It is a gross interference in the Hong Kong affairs, which are China's internal affairs, the office said in the statement.

"The purpose of the act is to disrupt Hong Kong and use it to contain China's development," the statement said. "We express our utmost indignation and condemnation over the series of acts of bullying by the United States."

The statement said the U.S. politicians' intention was to bolster the masterminds behind the chaos in Hong Kong and those extreme radicals and rioters attempting to disrupt Hong Kong and antagonize China, add fuel to the flames of violence and destroy Hong Kong.

"Their vicious plot has been exposed," it said.

The U.S. side and a few Hong Kong opposition politicians who follow Washington's lead should not underestimate China's firm determination to defend the prosperity and stability of Hong Kong, its strong will to implement the "one country, two systems" principle, and its ability and measures to safeguard national sovereignty, security and development interests, the statement said.

The series of evil misdeeds have set the U.S. side against the over 7 million Hong Kong residents, the 1.4 billion Chinese people, the principles of justice and righteousness in the world and the the basic norms governing international relations, it said.

The Chinese side will take effective countermeasures and all the consequences will be borne by the U.S. side, it warned.

Any tricks that attempt to undermine Hong Kong's prosperity and stability and hinder China's development will never work, it stressed.