HONG KONG, April 13 (Xinhua) -- The Liaison Office of the Chinese Central People's Government in the Hong Kong Special Administrative Region (HKSAR) on Monday expressed regret over biased reports of some western media on a recent ruling of the HKSAR High Court that upholds the constitutionality of invoking Hong Kong's emergency ordinance to enact an anti-mask regulation. 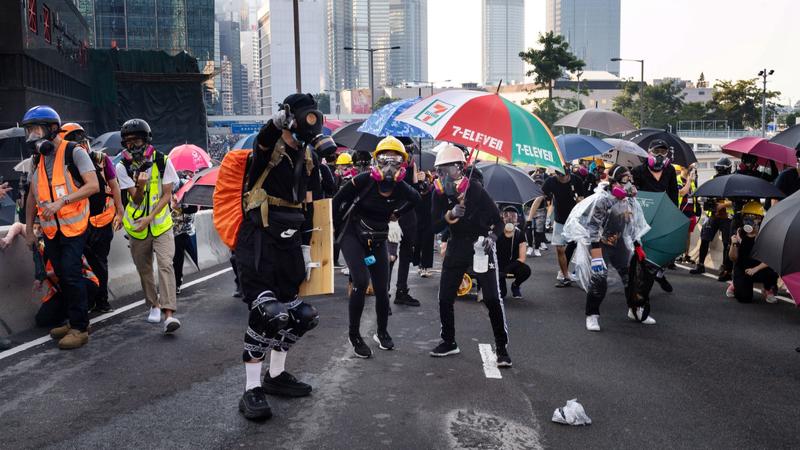 A spokesperson of the office stressed in a statement that the ruling is in line with the Constitution and the Basic Law and has been widely endorsed by various sectors of Hong Kong society.

The Court of Appeal of the High Court last Thursday said in a judgment that it upholds the constitutionality of the Emergency Regulations Ordinance that empowers the HKSAR Chief Executive in Council to make emergency regulations on any occasion of public danger.

Enacting the anti-mask regulation is necessary to stopping violence and restoring order for the interests of Hong Kong residents, the spokesperson said, noting that wearing masks was the main way for radicals to escape justice after committing violent acts last year, which seriously jeopardized the rule of law.

However, some Western media reported the case in a selective and partisan manner and made improper comments, which is not helpful for the international community to understand Hong Kong's situation and is also contrary to the principle of objectivity and fairness, as well as the ethics of journalism, the spokesperson said.

"We respect press freedom and right of reporting of western media and welcome more attention and coverage on Hong Kong, but they must adhere to the truthfulness, objectivity and balance of reporting," the spokesperson said.

While showing understanding of the attention of western countries including Britain on Hong Kong, which is highly internationalized, the spokesperson reiterated firm opposition to and strong condemnation on the attempts of some western countries to interfere in Hong Kong affairs and use Hong Kong as a tool to contain China's development.

The spokesperson said quite a number of countries and regions in the world have passed their own regulations to ban protesters wearing masks in case violent crimes and terrorism plunge society into the abyss of anarchism, which is a proper and necessary means for the governments to safeguard order and security under extreme circumstances, with Hong Kong being no exception.

The decisive legal measures adopted by the HKSAR government amid enormous unrest and massive illegal activities last year are necessary and justified, the spokesperson said, adding that Hong Kong has largely retained its existing laws since returning to the motherland, except a few necessary amendments related to its constitutional status.

The spokesperson urged western media not to report Hong Kong affairs through "a colored lens" or in "double standards" and not to support violent activities and a few opposition figures who advocate destruction, noting that such reporting is of neither the interests of Hong Kong nor the credibility of related media outlets.