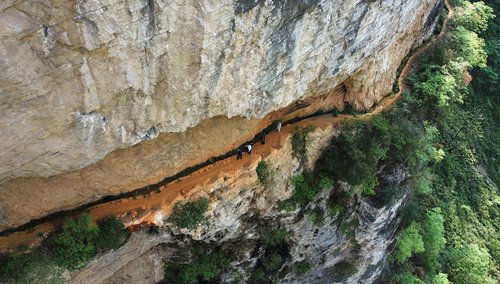 A 4,000-meter ditch on a sheer cliff has been the lifeline for residents of a mountain village in Southwest China's Guizhou Province over the past half century.Falang ditch was dug by villagers in Qinglin village, Tuanjie town of Bijie, Guizhou in the 1960s.Even though Qinglin village sits by the Chishui river, it suffered severe water shortages due to the large vertical drop between the river valley and the village."We were always thirsty while seeing the river, and having a bowl of rice was a luxury," Meng Qiheng, now 88 and one of those who took part in the construction of Falang ditch, told the People's Daily.In the 1960s, Qinglin villagers decided to do something about the situation. More than 50 of them volunteered to dig a ditch to draw water from the back of mountain.For the next five years, the villagers used the most basic tools - steel rods, hammers and chisels.Working on the cliff was dangerous, and they had nothing but a thick rope tied around their waists to prevent them from falling.After five years of hard work, the 4,000-meter Falang ditch was built. Since then, the villagers' water woes have been resolved. A thousand mu (around 66.7 hectares) of fertile farms were built in Qinglin village, and the annual output of rice reached 60,000 kilograms. For the 1,700 villagers, rice is no longer a luxury.The previously barren mountain is now covered in greenery. In recent years, villagers have even planted fruit trees to gain extra income.Meng is now a volunteer patrolman at Falang ditch. He said that the ditch is the pride of his life.Bijie was once among the most impoverished areas in China. Located in the center of the Wumeng Mountains, the area's development had been severely restricted. Six out of Bijie's seven counties were originally designated poverty-stricken counties at the provincial or national level. In 1988, the State Council, China's cabinet, approved Bijie as a trial zone for environmental protection and construction, development and poverty alleviation, the first program of its kind in the country.