As awareness of the paddlefish's extinction rises, the largest freshwater fish in the Yangtze River, concerns over the survival of many other fish in the East China Sea are emerging as well. This time it's the large yellow croaker (pseudosciaena crocea), which once topped China's four major marine products. It was also China's most popular market fish with a record annual production of 130,000 tons. Due to overfishing and population degradation, the yellow croaker population has fallen dramatically in the East China Sea since the 1980s. 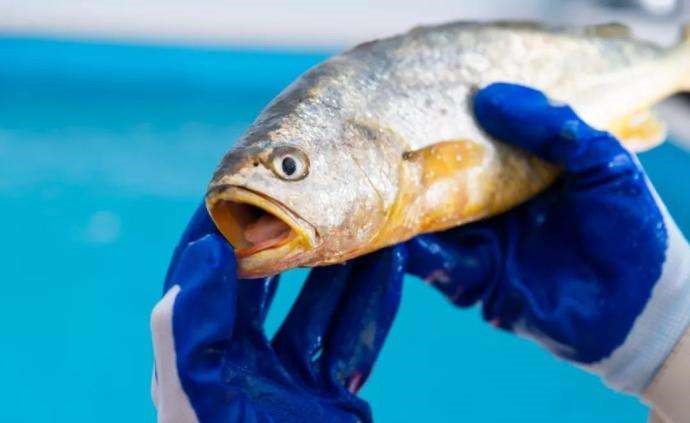 In 2019, the Rural Division of the Science and Technology Department of Zhejiang Province proposed a clear target of maintaining the wild large yellow croaker resources to 1,000 tons within three years in the East China Sea.

However, as the large yellow croaker has a long lifespan, it is tough to rebuild their ecological resources in the East China Sea.

Despite the maturity of artificial breeding techniques and the ongoing annual oceanic fry release, Professor Lv Weiqun of Shanghai Ocean University said the fish's swimming ability is not strong and its survival in the natural region is not favorable after the fry is released.

Because of this, the life skills training for hatchery fish of the yellow croaker was put on the agenda. The method of gradual transition from purely artificial to purely wild in this training is an important innovation to improve the survival ability of breeding and releasing large yellow croaker.

Yan Xiaojun, Party Secretary of the CPC committee of the Zhejiang Ocean University and an academician of the International Eurasian Academy of Sciences (IEAS), and his team chose the waters off the Zhongjieshan islands as a training base for the life skills training for hatchery fish, after studying its activity area in the East China Sea.

The group developed a specialized degradable fishing net. The fish put into the sea were fed regularly in the net, which could effectively protect them from being preyed upon by larger fish. The large yellow croakers could also improve their swimming and foraging abilities.

Meanwhile, little fish as additional food sources can swim into the proportionately designed mesh. The degradable net will be dissolved in a 3-to-5-month period, exactly complying with the time span of large yellow croaker in the sea, enabling them to become part of the wild large yellow croaker population.

But raising the survival rate of large yellow croaker also faces some problems, such as the large budget, the lack of basic research of large yellow croaker's habits and the risk of breaking the new ecological balance. Yan said the project has been one of the most financially favored projects of the Science and Technology Department of Zhejiang Province. It has come up with a creative method, arousing public attention to oceans and fishery resources of the East China Sea.

Scientists plan to reshape the fishery resource ecology of East China Sea characterized by the wild large yellow croaker. They use many measures, including using smart equipment and the integrated application of pivotal technology, making breakthroughs in wildly training shoals of fish and seasonal settlements, reestablishing migration routes and mechanisms, re-estimating the food chain structure and the ecological capacity, as well as building a new mode of production composed by cultivation, fishing and capturing. That is how they can shape the East China Sea as a truly open marine ranching to all the seas.

"The fishing industry has hit a bottleneck. We will harvest a lot not only in economy but more in ecology and society if we combine deep-sea fish farming and large ocean farming as a flagship in the fishing industry," said Professor Sun Song, an academician at the International Academy for Europe and Asia (IAEA).