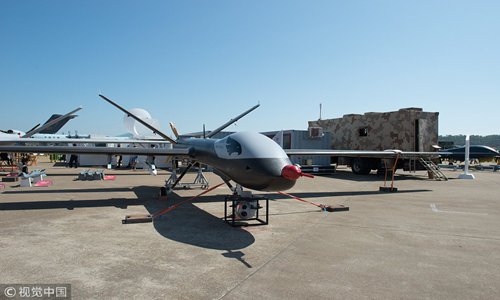 As an advanced variant of the Wing Loong I, the Wing Loong I-D provides another cost-efficient choice for potential buyers on the international market compared to similar products, which also come mainly from China, Chinese military experts said.

The drone took off for the first time at an undisclosed airport in western China on Sunday afternoon. It landed safely after a 30-minute flight, the drone's manufacturer Aviation Industry Corporation of China (AVIC) said in a statement released on Sunday on its WeChat account.

Wei Dongxu, a Beijing-based military analyst, told the Global Times on Monday that the utilization of the technology indicates China has made a breakthrough in making large structures with composite material, because an all-composite material fuselage has to be processed in one go and no joint is allowed, which is different and more difficult than previously used technology.

Loaded with a high-definition electro-optical pod and a synthetic aperture radar, the Wing Loong I-D is capable of carrying out missions including intelligence acquisition, surveillance, reconnaissance, anti-terrorist operation, border patrol and disaster evaluation, the statement said.

It also has four weapon stations under its wings capable of carrying more than a dozen types of precision strike weapons that are laser-guided or satellite-guided, AVIC said in the statement.

Based on matured technology since the development of the previous Wing Loong I, the Wing Loong I-D possesses several changes to meet demands from users, according to the statement.

The most noticeable change is its all-composite material design, making the Wing Loong I-D China's first drone to make use of such a technology, the company said.

The US-made RQ-4 Global Hawk, another modern advanced drone, uses traditional aluminum for its main fuselage, with composite material only being used in areas including wings and engine cover, the RQ-4 Global Hawk's manufacturer Northrop Grumman said on its website.

"Composite material is very light and can significantly decrease the weight of the drone, enabling it to carry more fuel and weapons," Wei said, noting that it can also make the drone more difficult to be spotted by hostile radar, increasing the drone's survivability.

AVIC also optimized the drone's aerodynamic design and installed in the drone a new engine with greater power, the company said.

All of these changes make the Wing Loong I-D enjoy a significant performance boost in takeoff weight, operating endurance, amount of payload and service ceiling, according to the statement.

The world market now has another cost-efficient choice, the expert remarked.

Countries like Egypt, Indonesia and Serbia are operating the Wing Loong I, Jane's Defence Weekly reported.

AVIC's Wing Loong drones are not the only Chinese drones popular on the international market.

The CH series developed by the Chinese Academy of Aerospace and Aerodynamics under the China Aerospace Science and Technology Corp (CASC) is also a top-seller with countries including Algeria, Iraq, Saudi Arabia and the UAE operating the CH-4 armed reconnaissance drone, according to Jane's Defence Weekly.

Competition between AVIC and CASC is great for the overall development of Chinese drones, as the two firms are eager to find ways to create better drones and with a wider range of applications, the anonymous expert said.