CHINA Line Friends denies reports on its withdrawing from China, saying continuous efforts on the market

Line Friends denies reports on its withdrawing from China, saying continuous efforts on the market

Line Friends, one of the world's fastest growing global character brands under South Korea's top internet firm Naver, said on Tuesday that recent media coverage of its "withdrawing from the Chinese market" is not true, and its offline adjustment was just to meet the demand of overall strategic layout, while vowing to continue expanding in the market. 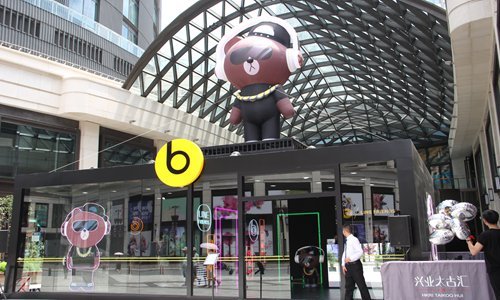 A model of DJ Brown appears at the pop-up store of Beats and LINE Friends in HKRI Taikoo Hui in Shanghai. (Photo: CFP)

The brand's recent moves of shutting down a slew of physical stores in China have sparked speculation that it is set to exit the Chinese market. The latest shutdown occurred in its Shanghai store located on the Huaihai Road in early May, which reportedly could attract nearly 100,000 visitors in a single day when it was opened in 2016.

Prior to that, the South Korean character brand based on messaging app Line has closed offline stores in such Chinese cities as Beijing, Hangzhou, capital of East China's Zhejiang Province and Southwest China's Chongqing Municipality. It had 12 brick-and-mortar stories in China at the peak, domestic news site jiemian.com reported.

Line Friends would probably later shut down its two remaining stores - one in Chengdu, capital of Southwest China's Sichuan Province and the other one in Nanjing, capital of East China's Jiangsu Province, as the brand seeks to pursue an asset light model and place more effort on digital transformation, the jiemian report said.

"Digitization, localization, and innovation are Line Friend's strategies for the Chinese market that was put forward since 2019, and they have always been implemented. Regarding offline space, we will focus more on new-retail layout, pop-up store activities, and space theme authorization in the future, in order to expand the relationship with consumers through a 'lighter' offline model and work more closely with local brands," the South Korean brand said in the statement.

Despite the pandemic impact in 2020, Line Friends achieved IP-related transactions worth 1.7 billion yuan ($266 million) in the Chinese market. Following the independent operation of IP authorization business in the Chinese market in 2018, it has maintained a business growth of close to 20 percent each year, having more than 100 authorized partners covering fashion, beauty, sports, toys, food and other categories, company data revealed.