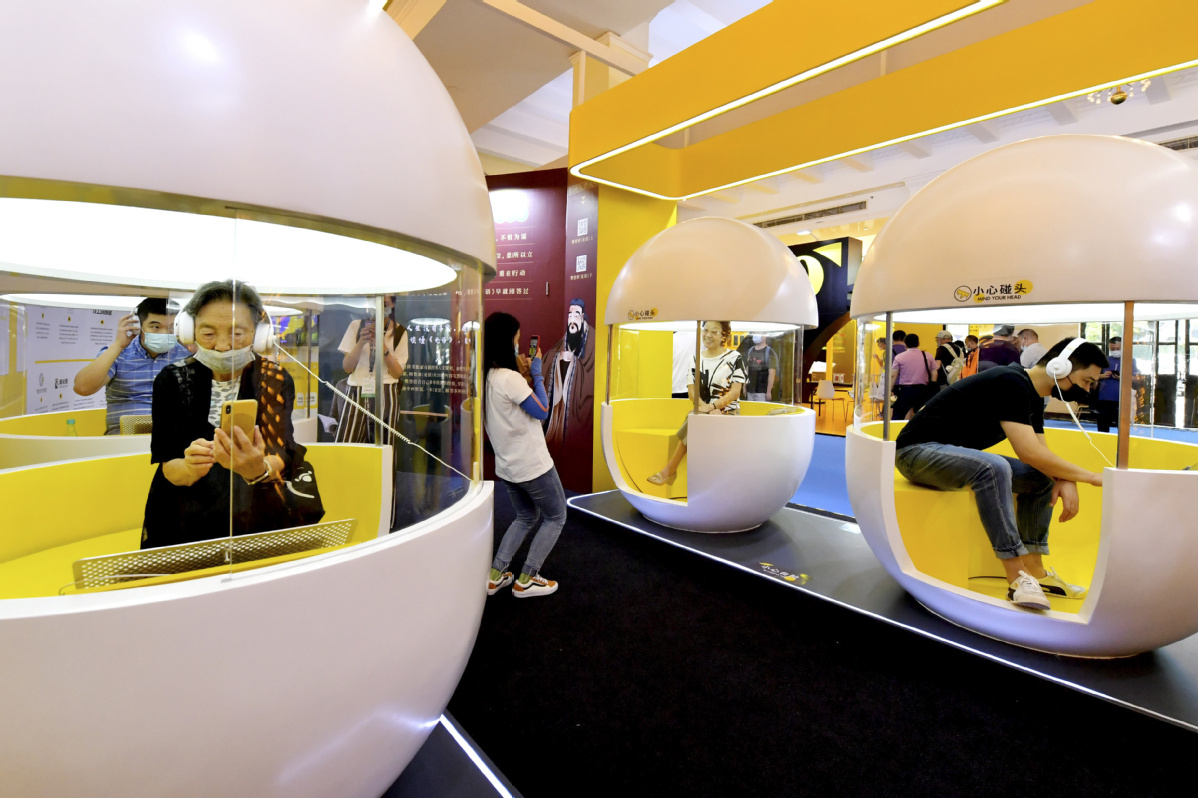 Eighty-year-old Wang Ailing made a special bus trip a few days ago to the Shanghai Book Mall in the city's downtown area to reserve a ticket for the Shanghai Book Fair. This is the 17th year the city has hosted the book extravaganza, which opened on Wednesday, and Wang has been a regular visitor every year since its launch.

"My grandchild was in kindergarten when I first came to the fair, and now my grandchild is in college," she said at the cafeteria area of the book fair, which runs until Aug 18 at the Shanghai Exhibition Center.

Wang said she "waited for half an hour in line to get the ticket, and then waited in another line for a volunteer help me complete the online registration process".

All visitors to this year's book fair have to register in advance and the organizers have limited the number of daily visitors to 18,000 in order to comply with the city's regulations on COVID-19 prevention.

A display in the central lobby of the book fair showcases the third and latest volume of Xi Jinping: The Governance of China, published in June by the Foreign Languages Press in both Chinese and English.

This new volume collects 92 articles, including speeches, conversations, instructions and letters by Xi, general secretary of the Communist Party of China Central Committee, between Oct 18, 2017 and Jan 13, 2020.

Lu Cairong, deputy director of the China Foreign Languages Publishing Administration, said this is the first time the new book has been showcased at a large-scale exhibition.

Thirty copies of the first and second volumes of Xi Jinping: The Governance of China in 15 different languages, including Chinese, English, French and Russian, are also on display. In addition, 91 other important books written by Xi, as well as those containing his speeches and statements, are exhibited in the central lobby.

Zhao Feng, general manager of Shanghai Book Mall, told local media that thousands of Party and government institutions and enterprises have ordered the new book since it was published on June 30.

During this year's book fair, more than 700 book launches, writers' lectures and other events will take place, along with a large number of online events via video-sharing platforms and social media, which will help the event reach a wider audience.

The book fair, held annually in the summer, has already become a gala cultural event for Shanghai residents. Although almost all of the books featured can be purchased online, the charm of reading and purchasing volumes at the book fair is valuable to the city's book lovers.

"I will surely come again next year," said 80-year-old Wang.

Another visitor, Zhou Ming, is a retiree and avid collector of vintage Lianhuanhua, palm-sized books, especially popular in the 20th century, featuring pictures that tell a story.

"There used to be a few outdoor book fairs and shops in Shanghai, where people who share the same interest met and traded with each other," Zhou told China Daily.

"These are reprinted editions of vintage Lianhuanhua books and the price is a bit high," he said, flipping through the pages of a picture book. "I guess I will buy some anyway. It is better than buying on the internet, when you just key in a title and search for a book… you will not be able to feel the pages and check its condition that way."