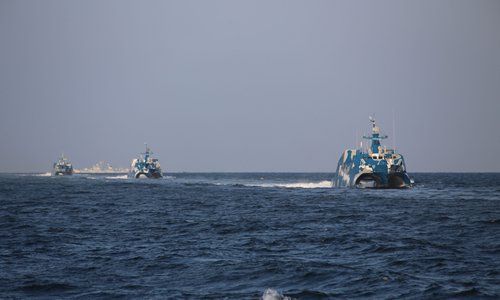 Fast attack missile boats attached to a group with the navy under the PLA Eastern Theater Command steam in formation during a maritime attack and defense training exercise in waters of the East China Sea in late March, 2018. (Photo: chinamil.com)

Several missile boats participated in the four-day live-fire exercises, where they practiced firing guns at maritime targets, shooting jamming rounds, releasing smoke and maneuvering in formation, navy.81.cn, the website of the PLA Navy, reported on Monday.

The training courses in the drills showed the Type 022 missile boats can play a support role in coastal combat, as many of them can arrive at battle positions faster than any other type of larger warship, release jamming rounds or smoke to win tactical advantages for larger, friendly ships, and leave the scene immediately relying on their high speed and stealth design, a military expert who asked for anonymity told the Global Times on Thursday.

The drills also tested damage control operations, rescues, water mine countermeasures and buoy deployment with the aim of enhancing the troops' capability to deal with emergencies and use technical equipment, the navy.81.cn report said.

Since the mass production of larger warships like the Type 056 corvette, Type 054A frigate and Type 052D destroyer, the Type 022 missile boat - which was designed mainly for coastal defense operations where it would launch rapid missile attacks on large hostile warships in coastal waters - seemed to have lost its significance despite its advanced design, and reports on the boat became less frequent, observers noted.

The Type 022 is likely further developing its role of offering support in addition to attack functions, the expert said, noting that maintaining the boats and conducting training can maximize their potential and enhance China's coastal combat capability.

More than 80 Type 022s have reportedly been commissioned into the Navy.