XI'AN, May 6 (Xinhua) -- Livestreaming services have become a new way to sell farm produce in China, while the country is upgrading e-commerce networks in rural areas. 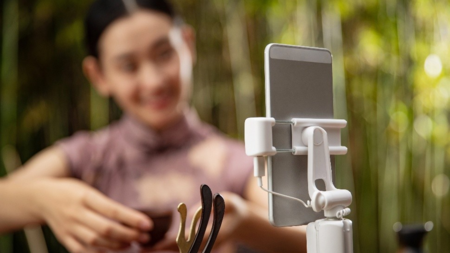 Li Xuying, a Taobao shop manager in northwest China's Shaanxi Province, sold out more than 20 tonnes of agaric worth more than 3 million yuan (about 425,000 U.S. dollars) with two online celebrities Li Jiaqi and Wei Ya on the evening of April 21.

This has been made possible by China's investment in rural e-commerce infrastructure.

Currently, 556,000 incorporated villages have access to postal services and more than 30,000 express delivery outlets are operating in rural areas, the report said.

Thanks to government support and the popularization of the Internet, China's e-commerce giants including Alibaba and JD.com are placing greater focus on rural areas to help wipe out poverty.

Alibaba launched in April a plan to build 1,000 digital agriculture bases. It also signed an agreement with the commerce authority of Shaanxi Province to broaden sale channels and enhance e-commerce service in rural areas.