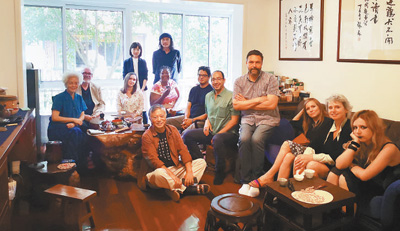 During the past 12 years, more than 100 writers from 38 countries around the world have been invited to live in east China’s Shanghai for two months, feeling the true lives of the people in Shanghai and connecting the city with the world’s literature circle.

“I learnt Tai Chi moves and read my stories in parks of Shanghai, where I also saw people writing Chinese characters on the ground with a giant brush and water. I danced there, and read there,” recalled a Mexican writer, who participated in the Shanghai Writing Program in 2011.

The program, Shanghai Writing Program, was officially initiated in 2008, when three female writers from Canada, Australia, and Japan became the first batch of participants in the program.

Hosted by Shanghai Writers’ Association, the program was designed to help writers around the globe have a thorough understanding of the real Shanghai and draw inspiration for their writing.

After verification, gaining understanding of the candidates, and selection, the final list of participants is announced. The chosen writers get the opportunity to live in Shanghai for two months.

Instead of fancy hotels, these writers are arranged to live in ordinary residential apartments surrounded by local residents, thus enabling writers to actually live in the city and feel the everyday atmosphere of the city like every Shanghai resident.

“We are not going to invite writers to a tourist destination, but a real Shanghai and the everyday life of the city,” said Hu Peihua, chief coordinator of the program, who is also the director of the liaison office of the Shanghai Writers’ Association.

As writers get familiar with Shanghai and become used to the life in the city, they often realize that two months passes so quickly.

With her period in the program approaching the end, Lisa Teasley, an American writer, said she felt the pain of leaving the city, as she has gradually regarded Shanghai as her home.

The program does not require writers to submit works about Shanghai within a definite time. “Literature is not utilitarian. Literary creation is spontaneous and cannot be constrained,” stressed Hu.

Besides living in local dwellings for two months, writers are also invited to attend three literature seminars and symposiums of Shanghai writers, as well as visit universities. Most of the time, writers can freely travel around the city and walk along the streets to explore the charm of the city.

For many years, the world’s understanding of China has been more or less limited by such symbols as kung fu and red lanterns, and movies including the James Bond series have made Shanghai a legendary but unreal place, said Wang Anyi, the most important initiator of the program, who is also the chairman of the Shanghai Writers’ Association.

In order to present a real China and a real Shanghai to the world, more writers need to come to China to experience and deliver different stories of the country and its cities, explained Wang.