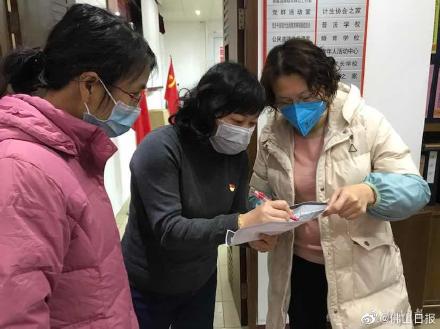 QINGDAO, Feb. 3 (Xinhua) -- Hearing a few knocks at the door, the occupant surnamed Song hurriedly answered it but found no one, only a few bags of fresh vegetables, pieces of meat and boxes of eggs.

Song and his wife, as well as their teenage grandson, were told to stay at their apartment in Qingdao, east China's Shandong Province, for two weeks after returning from the city of Wuhan, the center of the novel coronavirus outbreak.

Benefiting from others who leave food at the door for free while refusing to leave a name has become a daily routine for the family since they returned.

Besides groceries, the family also receives daily necessities from the local community office. Workers from the office have taken on the responsibility for meeting the needs of isolated households like Song who returned from Hubei Province which has been hit hard by the epidemic.

Workers also check their temperature every day via phone calls and set up an online chat group where quarantined residents can share their shopping lists.

"They always deliver the groceries we need on time, but I feel bad about them not charging us," Song said. "I will definitely thank them for their efforts afterward."

Hubei had reported 11,177 confirmed cases of the novel coronavirus infection by Sunday, with 350 deaths and 1,701 cases in severe or critical condition.

In response to nationwide measures of early detection and early isolation, public security offices, local communities, hospitals, and hotels have all joined the anti-epidemic campaign to ensure the provision of medical and daily necessities to isolated travelers, especially from Wuhan.

Wen Ying from Wuhan with 310,000 followers on social media posted her "isolation diary" during her stay in the northwestern city of Yinchuan, followed by hundreds of likes and comments.

Due to a flight cancellation, Wen was stranded in Yinchuan. At first, she was concerned that her identity as a traveler from Wuhan would cause inconvenience during her stay.

"I told the owner of my homestay that I was from Wuhan before I checked in, but she welcomed me and prepared my room with more household items, which I'm really grateful for," Wen said in a video recording her isolation in the B&B.

Gao and her four-year-old daughter from Wuhan are also isolated at home after they arrived at Qingdao for a family reunion during the Spring Festival.

"My daughter wondered who made the phone calls every day," Gao said. "I told her it's from the community where we live. It's like your teacher from kindergarten who takes care of you."

"She listened but didn't fully understand," Gao said. "She went back to play with her toys and later handed me two completed pieces and said they were her gifts to the person who called."