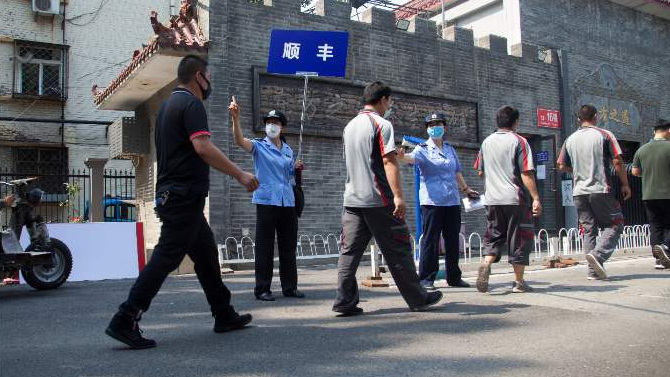 Logistics workers line up to get tested. (Photo: CGTN)

The Chinese capital is seeing a drop in new cases of COVID-19 after the spike from Xinfadi-related cases earlier this month.

But municipal government officials are not letting their guard down, especially after the "6·18" online shopping festival, an annual shopping spree held on the birthday of e-commerce giant JD.com. The shopping spree has led to a huge increase in the number of daily package deliveries, which also means increased human contact.

Logistics companies now face great challenges, not just in daily work, but also in ensuring safety as many of their employees need to travel in and out of high- and medium-risk areas on a regular basis.

CGTN spoke to Li Jie, employee of ZTO Express, who was waiting to get tested at one of the designated testing sites in Haidian District, about other precautions his company is taking.

Li said his company takes their temperatures every morning before they set off, and they are also provided with protective gear.

"We have hand sanitizers, disposable gloves and facial masks in our car to make sure both ourselves and the customers are safe," said Li.

Li works in one of the medium-risk areas, and when asked whether his work routine has changed, he said deliverymen are not allowed inside sealed-off compounds, but added that the ZTO has been adopting "zero contact" service.

"We will put the packages at designated areas of the compounds according to house numbers," Li explained, saying "people can come collect their packages without any risk."

As of Monday, 17 major delivery agencies in Beijing have participated in the citywide testing campaign.

And the municipal government has paid for the tests of over 100,000 deliverymen since Friday.

Communities have dispatched volunteers and police officers to maintain order at the designated sites. The test recipients are required to stand 1.5 meters apart to avoid cross-contamination.

No confirmed cases have been reported among those tested.

Beijing has ordered the testing to cover as many service industry workers as possible.

So far, many working in hospitality sector and the online car-hailing industry have been tested.