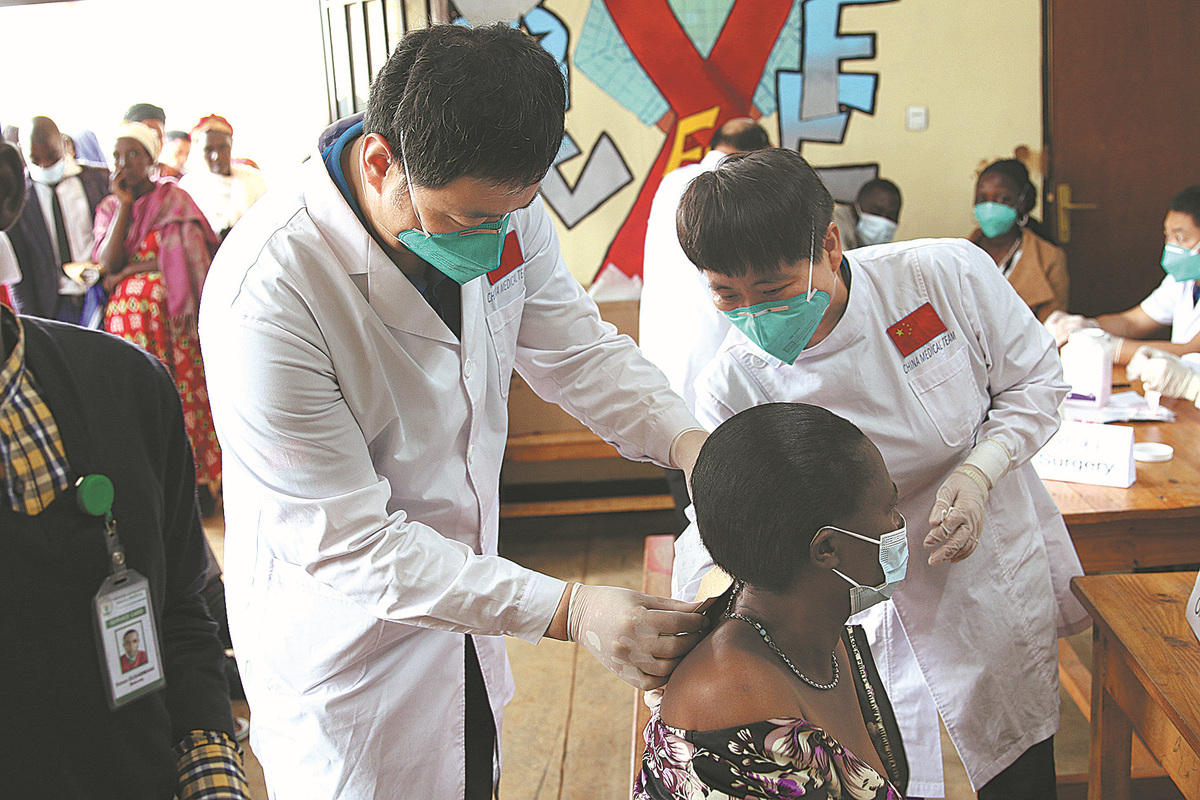 Members of the 22nd Chinese medical team to Rwanda treat a local patient at a health center in the capital Kigali on Wednesday. The team provided free clinical services for locals from Tuesday to Thursday. HUANG WANQING/XINHUA

China has offered 290 million times of diagnoses and treatments for overseas patients since 1963 when the country sent its first overseas medical support team to Algeria, China's top health authority said on Friday.

"In the past nearly 60 years, we have sent a total of 28,000 medical workers to 73 countries and regions around the world, saving countless lives," He Zhaohua, deputy director for international cooperation of the National Health Commission, said at a news conference, adding that over 2,000 medical workers have been awarded Chinese and foreign national-level honors for their efforts.

The overseas medical support has been offered constantly to developing countries in need. It includes not only sending medical teams, but also establishing hospital partnerships and carrying out short-term free clinics, he said.

"Previously, many Tanzanian patients with heart disease had to go overseas for treatment. Now they are able to accept treatment in local China-aided hospitals, thanks to years of efforts and bilateral cooperation," he said, noting that even many patients from neighboring countries have come to those hospitals aided by China to receive medical treatment.

Since the 18th National Congress of the Communist Party of China in 2012, China has also made its contribution to the fight against major virus outbreaks across the world, such as the Ebola epidemic in Africa and the COVID-19 pandemic.

"From 2014 to 2015, we sent more than 1,200 clinical and public health experts to assist the affected countries in West Africa and brought the Ebola epidemic under control, without any medical workers being infected," He said.

Since the outbreak of the SARSCoV-2 virus, China has maintained close communication with the World Health Organization and other countries and regions, shared the gene sequence of the virus with the world, drawn up and released protocols for diagnosis and treatment as well as prevention and control, and reported epidemic information openly and transparently, he said.

According to the commission, during the COVID-19 pandemic China has held technical exchange events with more than 180 countries and more than 10 international organizations, and sent 37 medical expert teams to 34 countries in Europe, Asia, Africa and South America to share the country's experience.

"We have deepened our cooperation by teaching medical operating skills, holding training lectures and conducting consultation for complicated diseases with local medical staff," he said, adding that some Guinean medical staff have also been invited to China for further study.