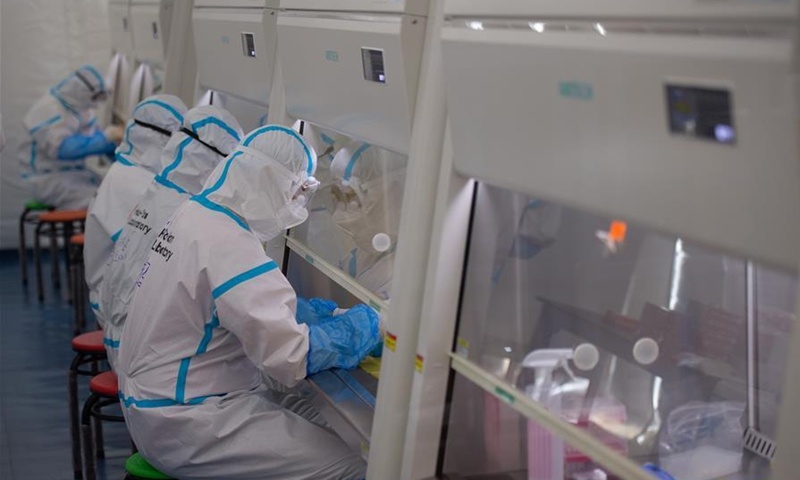 China confirmed on Sunday a second imported case of the new, more transmissible coronavirus variant that has been spreading wildly in the UK. China's chief epidemiologist and public health experts said the current prevention mechanism will be effective in warding off the spread of the imported variant in China, but the measures might be escalated if more cases occur.

The Center for Disease Control and Prevention (CDC) of South China's Guangdong Province said in a Sunday announcement that it detected the B.1.1.7 variant in the nucleic acid test sample from a Chinese student who returned from the UK on December 4. The genetic sequencing of the variant is highly similar to that of the mutated virus reported in the UK.

The 18-year-old male tested negative for COVID-19 nucleic acid on arrival in Guangzhou on December 4 but later tested positive on December 18 during his quarantine.

This is the second case of the imported new variant in China after Shanghai's CDC announced on Friday that the genetic sequencing of an imported case confirmed on December 16 was found to be similar to that of the variant detected in the UK.

The case in Guangzhou added to public concerns about the risks of the new variant's spread in the country, which people who returned from the UK might bring. China imposed a ban on flights from the UK on December 24, 2020.

Hong Kong will resume direct passenger flights to London on a daily basis from Sunday, according to Hong Kong media.

There are voices on China's social media that suggest the quarantine time of returnees from the UK and even Europe as a whole should be prolonged and prevention should be strengthened against potential virus variant carriers.

Zeng Guang, chief epidemiologist of CDC, told the Global Times on Sunday that it is not necessary for now to lengthen the quarantine period for returnees, since these are only two individual cases, and it would be better to wait and see if more similar cases take place.

China will continue to guard against importing the new variant and should consider escalating the measures if the situation changes and more such cases are reported, Zeng noted.

Yang Zhanqiu, deputy director of the pathogen biology department at Wuhan University, noted that the infection and incubation periods of the two new-variant carriers are no different from those of patients infected with the coronavirus that we are already familiar with.

Wang Peiyu, deputy head of Peking University's School of Public Health, told the Global Times that there is no evidence that the mutated virus has a longer incubation period so there's no need to expand the quarantine time for potential new-variant carriers.

The Chinese CDC said on Friday that the new variant is more transmissible, but its transmissibility is closely related to interpersonal social activities, the climate in winter and people's self-protection measures.

To calm down the public, it also noted that there is no difference in pathogenicity or mortality between the new variant and the previous variant, so people do not need to panic.

As for the impact that the new variant might have on China's coming massive vaccination program, Zeng told the Global Times earlier that it will not have a major impact, as there was "nothing to suggest" that current vaccines would not work against it.

It is difficult to block the new variant from being imported, Zeng said. He said the most important task in preventing the spread of the mutated virus is to beef up measures to detect patients infected with the new variant at an earlier time.