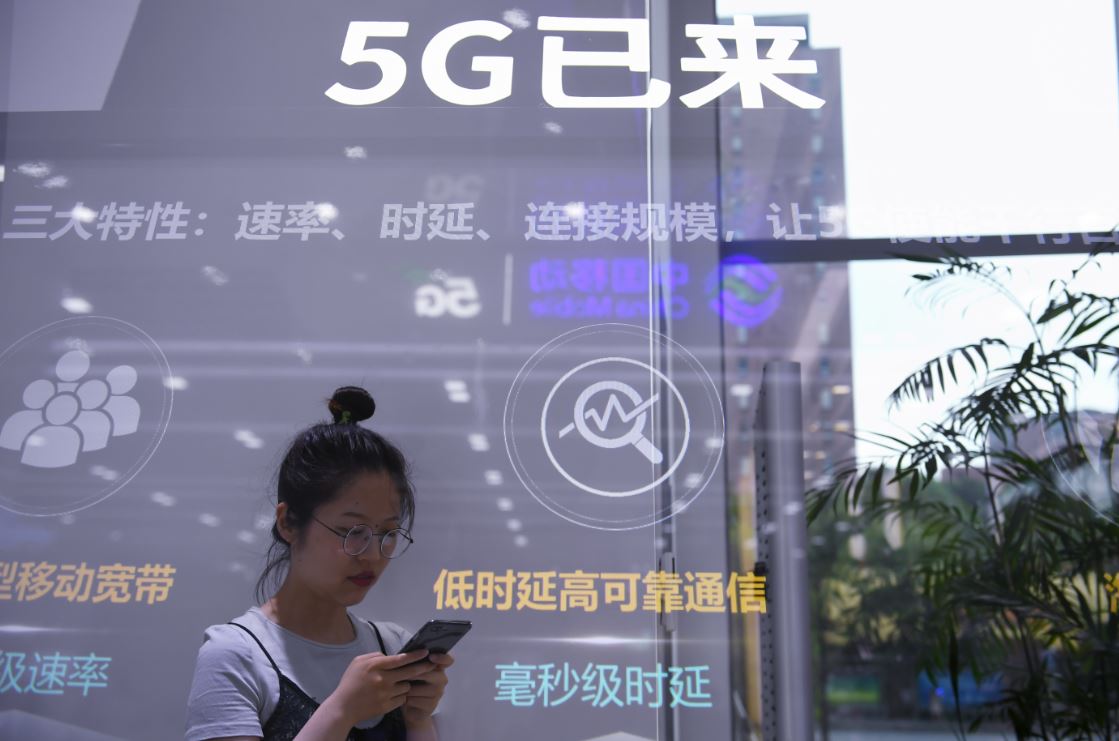 A consumer tries out a 5G handset at a 5G experience center in Jiangsu. (Photo by Qin Huai/For China Daily)

Zhang Wentao was wowed by Chinese smartphone maker Vivo when the latter announced the price of its first 5G handset at a product launch in late August in Beijing.

The 27-year-old electronics fan has been tracking 5G news for a long time. He is one of a growing number of Chinese consumers who are eager to see how the superfast mobile telephony technology "performs" in reality as the public expectation of 5G is sky high.

Vivo iQOO Pro is priced 3,798 yuan ($536) upward, the most affordable 5G smartphone so far. The price is about 2,000 yuan to 3,000 yuan lower than 5G alternatives unveiled by domestic rivals such as Huawei Technologies Co and foreign competitors such as Samsung Electronics Co, and falls in the same price range as some of the 4G handsets currently selling in the market.

"With strong capabilities and such an appealing price, I see no reason why I should not buy one," Zhang said.

Vivo's low-price 5G handset appears to suggest that the battle for market shares in China has begun earlier than expected as companies adopt aggressive pricing strategies to lure the first batch of early adopters, experts said.

"One of the key hurdles in 5G adoption, aside from having 5G network support, is the price of 5G smartphones. So the cheaper they get, the easier it will be to convince people to buy them," said Fu Liang, an independent telecom analyst.

China granted licenses for commercial use of the new-generation wireless technology on June 6. In July, 72,000 units of 5G smartphones were shipped in the country, data from the China Academy of Information and Communications Technology showed.

According to a survey by Citibank, 87 percent of Chinese consumers indicated they might or will buy a 5G phone this year.

So far, four 5G smartphone models, from ZTE, Huawei, Vivo, and China Mobile respectively, have been unveiled in the country. At least three more 5G models are scheduled to be launched this month.

James Yan, research director at Counterpoint Technology Market Research, said the prices of 5G smartphones are lower than market expectations. 5G handsets differ from 4G versions in components, including chips, radio frequency, antennae, and power amplifiers. The added costs of such parts are about $80.

Previously, industry experts forecast that the first 5G models might retail for as high as about 10,000 yuan per piece due to high production costs.

Vivo said pre-orders for its iQOO Pro model are worth more than 100 million yuan as of Sept 1, 10 days after its launch.

Qin Fei, general manager of telecom research at Vivo, said at a suitable price, users can use 5G phones as soon as possible. On that basis, new mobile apps will emerge, as software developers will become better motivated to see that 5G users are growing rapidly. This, he said, will create a virtuous circle in the 5G market.

To be sure, low prices alone won't persuade consumers to migrate to the new tech, experts said. Quality is key, though more and more consumers appear to be open to buying latest electronic products.

"The idea of a 5G phone is especially appealing to young people as they consume a lot of video content and game products, which require a fast and stable internet connection," said a spokesperson for Fenqile, an installment e-commerce platform under Nasdaq-listed LexinFintech.

Some 80 percent of the customers who pre-ordered the recently released Huawei Mate 20X on Fenqile are from the Generation Z (those born in the last 25 years). The first batch of the phone units had been sold out within just one second on Fenqile on Aug 16, the company said.

Installments are the preferred mode of payments among young consumers in China, especially when they buy expensive products, as such payments make trendy and high-quality phones affordable, the company said.