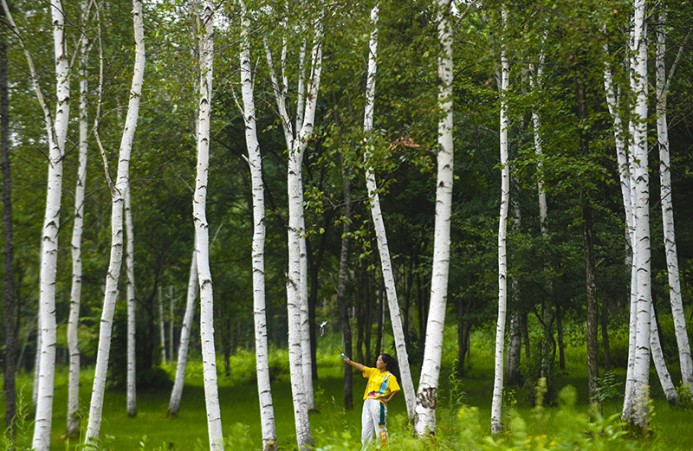 A tourist takes a selfie in a birch forest in Yichun, Northeast China's Heilongjiang Province on August 8, 2019. (Photo: Xinhua)

Calling it a move to "pay back" the mountains, Ma Yongshun planted more than 50,000 trees with his family after retirement.

Ma was among the first generation of lumberjacks in China who set a record of felling 1,200 cubic meters of trees in a single winter.

"We benefited from the woodland, so we must protect it for our future," said Ma Lizhi, grandson of the late Ma Yongshun.

The city of Yichun, where Ma's family lives, lies in Northeast China's Heilongjiang Province and has been called the "forest capital" of China.

In 2014, commercial logging was banned in the natural forests of the Xiaoxing'an Mountains. Yichun started its economic transformation.

During an inspection tour of Yichun in May 2016, President Xi Jinping pointed out that the city's lumber industry contributed to China's national construction.

A full ban on commercial logging and a commitment to ecological conservation are also important contributions to the country, President Xi said.

He restated the importance of environmental protection and demanded concerted efforts to establish new industries other than logging.

The city has since been focusing on greener ways to generate wealth and transitioning to a more sustainable development path. 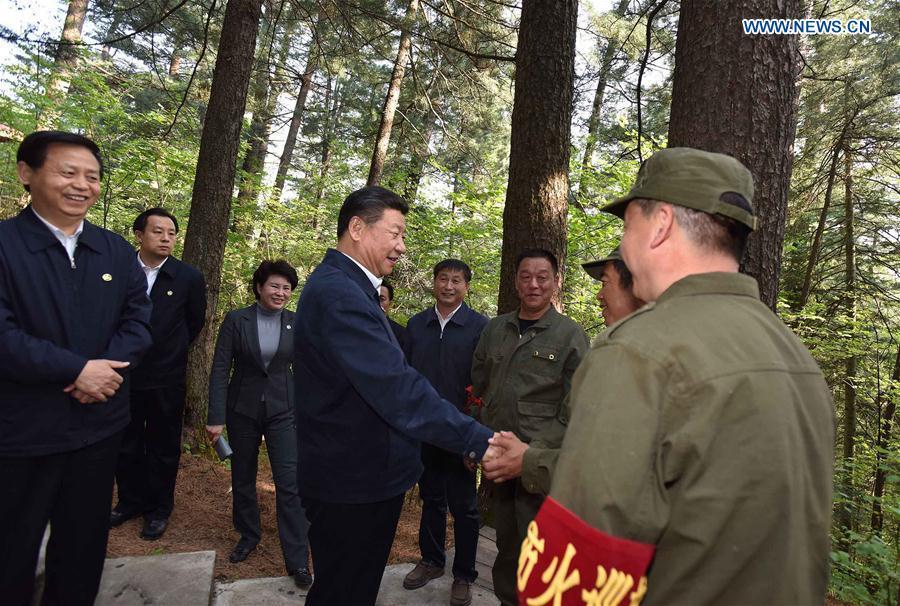 From logging to planting

To plant trees, Ma Lizhi has to walk 8 kilometers on a rugged mountain road.

After graduating from China's Northeast Forestry University, Ma Lizhi returned to his hometown and engaged in forest management at the forestry bureau, carrying on his grandfather's unfinished lifework.

The barren mountains of Ma's childhood memory are disappearing and forests are increasingly dense, he said.

From cutting down trees to planting and protecting trees, Yichun's forestry industry has shifted its development model.

Since the founding of the People's Republic of China in 1949, the city has supplied the country with 270 million cubic meters of lumber, or one-fifth of all state-owned forests.

In 2013, commercial logging of natural forests was banned altogether in Yichun. The city has since planted nearly 200 million trees, covering 120,000 hectares.

The environment in Yichun has improved and it's more common to see rare plant species, said Ma.

"My non-local classmates are envious of the fresh air here and even want to take some away," Ma said.

Liu Yangshun is one of the more than 70,000 veteran forestry workers laid off in the end of 2013 when Yichun banned all commercial logging.

On May 23, 2016, President Xi visited Liu's home and assured residents that the government would help them through the difficulties brought by restructuring.

He encouraged them to seek new ways to make a living through their own determination and resources, Liu said. 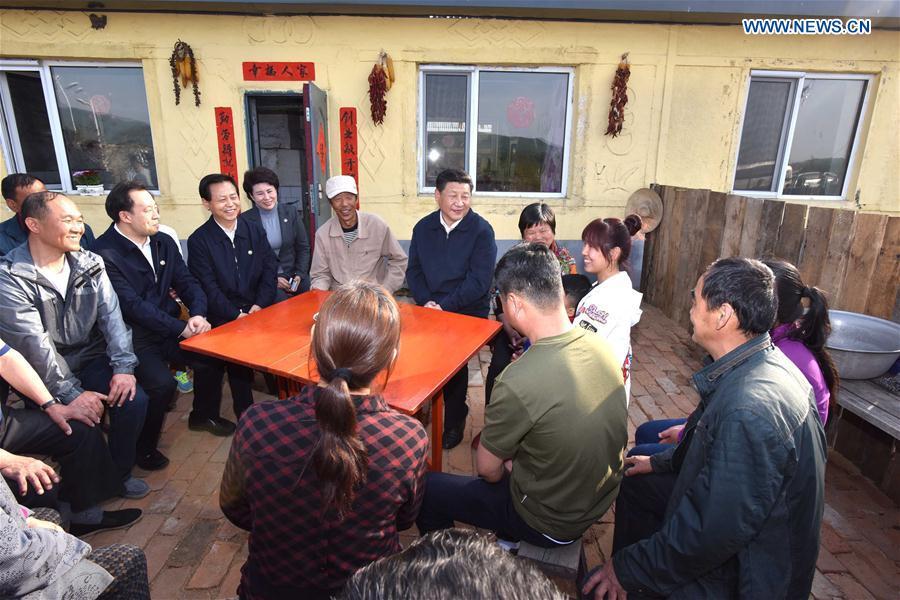 With government support, Liu runs a courtyard restaurant specializing in rustic flavors. In peak season, the restaurant earns more than 1,000 yuan a day.

Liu attributed the surge in tourists to the improved environment.

Agricultural tourism is thriving in Yichun. Homestay, car camping and forest bathing have emerged as new forms of tourism. 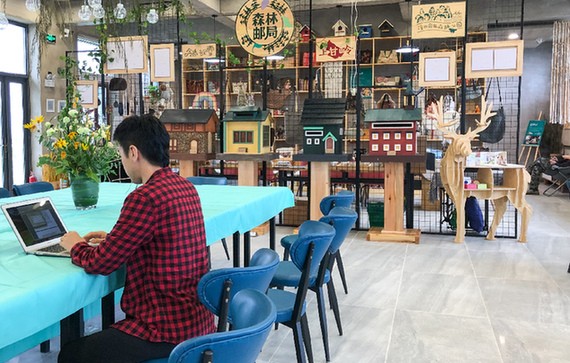 Yichun native Huo Chunlin used to make his living by logging. He too was perplexed at first by the logging ban.

He tried to grow herbs, but the income proved unsatisfactory because of the small scale and poor quality.

Supported by the government, Huo and his neighbors in 2014 formed a cooperative to cultivate traditional Chinese medicinal plants.

The government provided subsidies and the cooperative was responsible for processing and selling the plants. 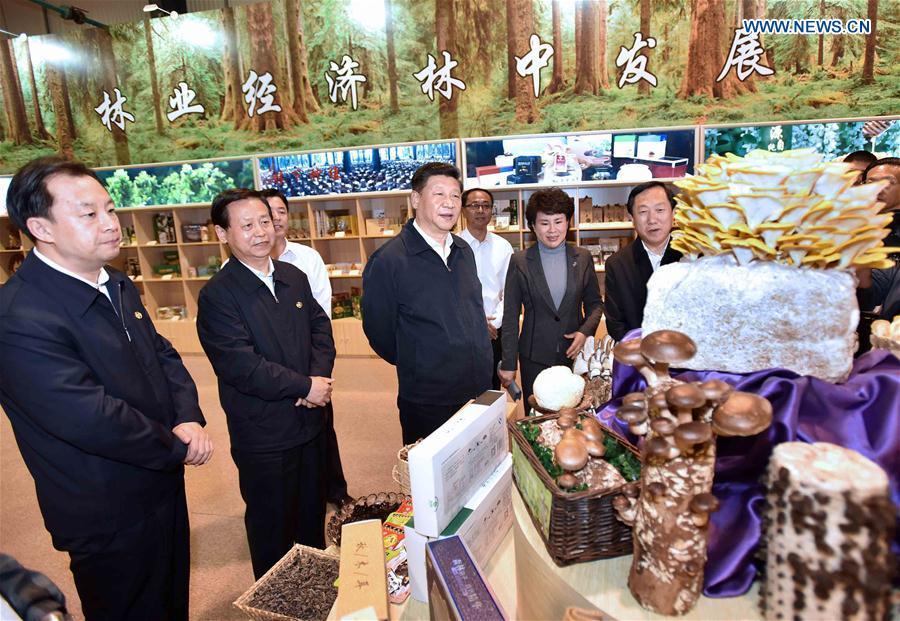 Whether growing blueberries for jam, wild fungus for drinks or plants for medicine, the people of Yichun are finding innovative ways to earn money.

Industrial projects are being launched in the city and specialties processed locally, creating jobs for more than 70,000 surplus forestry workers.

"With improved ecology, our medicinal plants are more precious. Better days are yet to come," Huo said.