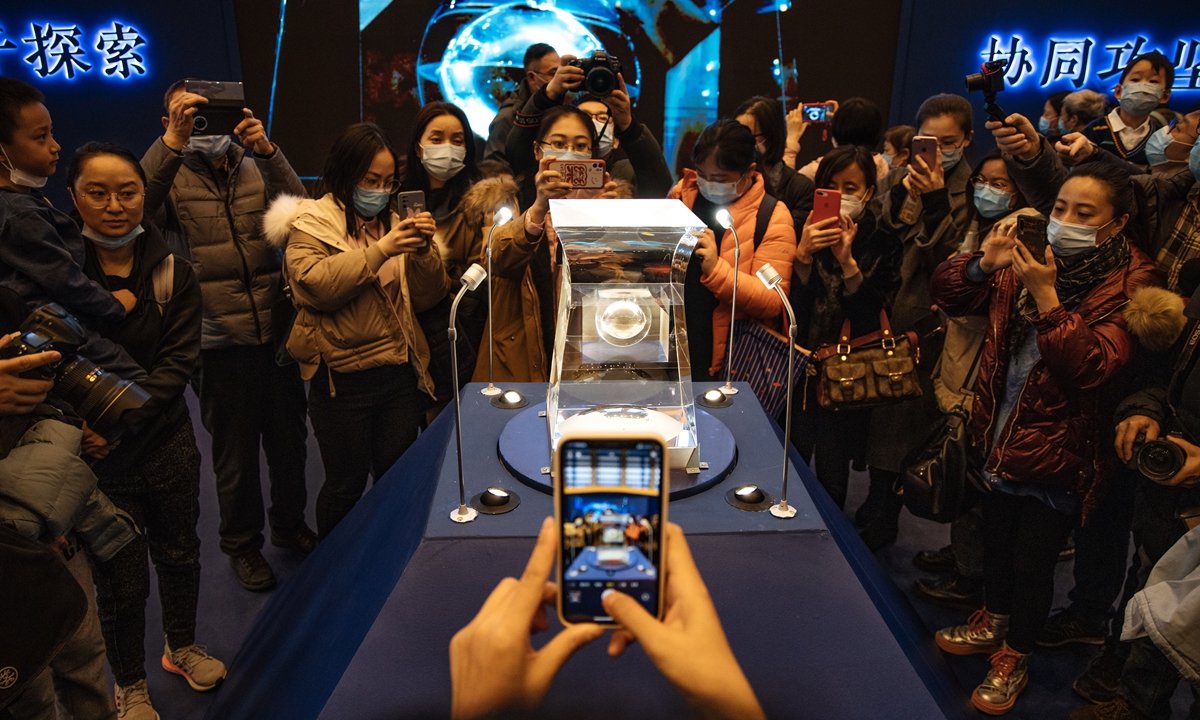 Visitors take photos of soil samples from moon retrieved by the Chang'e-5 lunar lander in December 2020, which went on display at the National Museum of China in Beijing. (File photo: Global Times)

Events explaining China's aerospace development, including an exhibition of lunar soil brought back by the Chang'e-5 lunar probe from its epic trip last December, are expected to be put on show in Hong Kong this week. The event will boost locals' patriotic sentiment and spur Hong Kong researchers to become involved in the country's scientific advance, local university professors told the Global Times on Monday.

Samples of the lunar soil that were retrieved from China's first extraterrestrial sample-collecting mission were due to arrive in Hong Kong on Monday, local media hk01.com reported, and they will be put on display at an exhibition center from June 27 until July. A smaller version of the Chang'e-5 lunar probe prototype will also be shown to the public.

Tang Fei, principal of the Heung To Secondary School (Tseung Kwan O) in Hong Kong, confirmed to the Global Times that he had received an important notice about the exhibition from the local education bureau.

A group of chief designers of various national space projects will visit Hong Kong campuses this week, exchanging views and sharing their experience in China's aerospace development with local students, according to a notice released by the Hong Kong Polytechnic University on Monday.

As the only research institute in Hong Kong that has taken part in the work of the Chang'e-5 mission, professor Yung Kai-leung and his team played a vital role in the collection of lunar samples, by developing an automatic surface sampling and packing system that collects, packs and seals soil samples from the lunar surface.

Chan Wai-keung, a lecturer at the university's division of social sciences, told the Global Times on Monday that it would be beneficial for local residents to arouse their patriotic sentiment through China's achievements in aerospace.

"It reminded me of the time when the first Chinese astronaut Yang Liwei paid a visit to Hong Kong in 2003, triggering overwhelming cheers as people regarded him as their 'superstar'," Chan said.

He added that Hong Kong should cherish the country's decision to bring such precious items to Hong Kong for exhibition, which will "encourage more Hong Kong scientists to participate in the country's scientific projects" and engage in academic exchanges with the Chinese mainland.

Zhou Jianping, the chief designer of China's manned space engineering project, said on Thursday during media interview that he will definitely include astronauts from Hong Kong in the country's future manned space activities, adding that he had been well-prepared for the selection of candidates in the region.

He noted that while Hong Kong astronauts cannot be taken aboard during the space station's construction, given the task's complexity, they will be included in future missions to the station.

Pei Zhaoyu, a deputy director of the Lunar Exploration and Space Program Center of the China National Space Administration, expressed similar willingness, as he welcomed Hong Kong scientists to participate in the research and study of the lunar soil collected by Chang'e-5 ahead of the mission's successful return, local media reported.

It's a much-anticipated journey as China sends its first batch of residents into space, marking yet another milestone in the country's aerospace program.

In China's first bold quest to retrieve material from an extraterrestrial body and return it to Earth, the Chang'e-5 lunar probe embarked on an epic journey on November 24, 2020 after it was launched from the Wenchang Spacecraft Launch Site in South China's Hainan Province.

Some 23 days later, the 11-stage mission was drawn to a perfect conclusion as the re-entry capsule, carrying with it a precious parcel of lunar soil weighing about two kilograms, landed safely in North China's Inner Mongolia Autonomous Region on December 17, 2020.

The mission made China the third country to have successfully brought lunar materials back to Earth, after the US and the former Soviet Union.

Regarded as one of the most complex and challenging explorations in China's aerospace history, the Chang'e-5 mission recorded many firsts in the country's space development, including the first-ever takeoff from the lunar surface, first lunar sample retrieval, and the first rendezvous and docking in lunar orbit.

It also achieved multiple technological breakthroughs that laid a solid foundation for future manned mission to Moon and other deep-space projects.