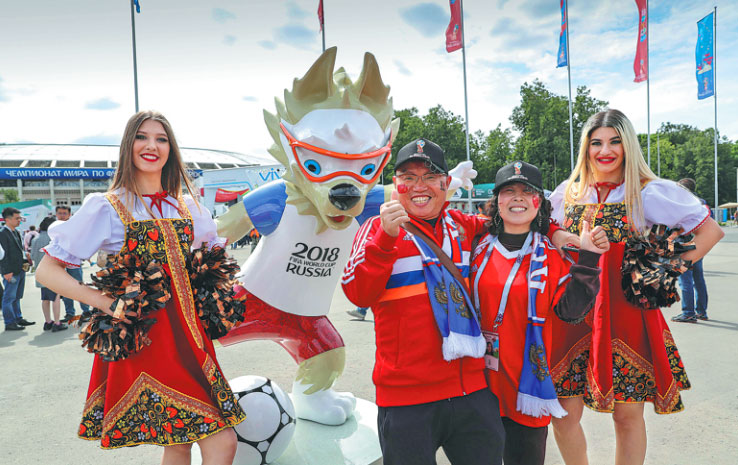 A Chinese couple from Jiangxi province say they are excited about attending World Cup matches as they pose with a mascot in Moscow on June 14, 2018. (Photo: Xinhua)

Xiao Yinyuan, who is in charge of outbound tourism at Ctrip, said that there are 20 direct flights from China to Russia each day, if each seat is occupied, there will be 4,000 Chinese flying to Russia each day. The fact that 90 percent of seats of some popular flights are taken, combined with the possibility that some fans would arrive on indirect flights, makes Chinese the main source of outbound football fans for the 2018 FIFA World Cup Russia, which lasts until July 15, he added.

In addition to this prediction based on flights, Ctrip also cited data from FIFA, soccer's international governing body, which said that 40,251 tickets have already been sold to Chinese citizens, making China the ninth worldwide in the number of tickets buyers.

Those who buy tickets plus some others who get tickets from sponsors and regular tourists will make the number of Chinese visiting Russia during the World Cup reach 100,000, according to Ctrip, which predicted China to be among the top three exporters of tourists to Russia.

Ctrip said that on its own platform, a total of 5,000 Chinese have booked Russia-bound tours, 10 times more than the number of tourists bound for Brazil, where the tournament was hosted four years ago.

Each Chinese may spend an average 30,000 yuan on travelling, tickets and living while staying in Russia.

An average packaged tour costs 14,000 yuan, up 50 percent compared with normal prices, according to Ctrip. The online travel agency added that orders for its World Cup-packaged tours made at its offline outlets show that each client has spent more than 30,000 yuan and a tour booked via its World Cup- themed tour channel costs more than 50,000 yuan.

Tours including watching semi-finals or finals cost an average 180,000 yuan.

Inflow of Chinese tourists has made Russian tour guides very popular as orders for such native tour guides on Ctrip pick up 100 percent, said the agency.