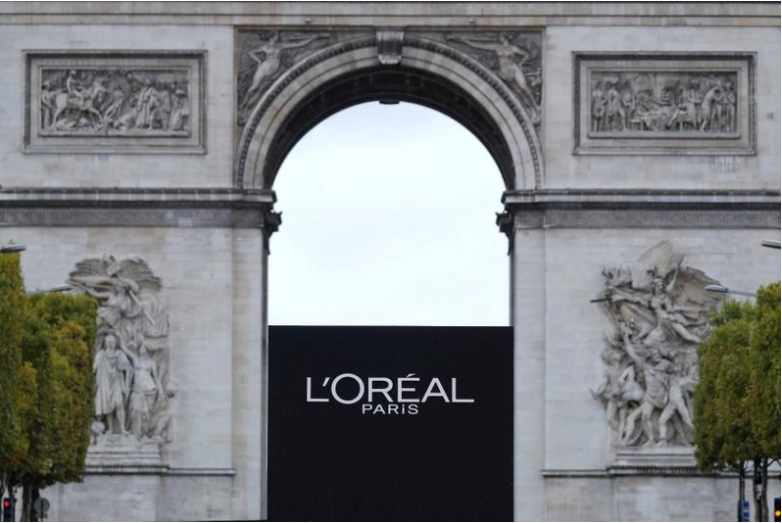 FILE PHOTO: The logo of French cosmetics group L'Oreal is seen in front of the Arc de Triomphe during a public event in Paris, France, October 1, 2017. Photo REUTERS/Charles Platiau/File Photo

L‘Oreal (OREP.PA), the world’s biggest cosmetics company, beat third quarter sales expectations on Thursday thanks to surging demand from Chinese consumers and strong appetite for Lancome and its other luxury brands.

Robust revenue growth in L‘Oreal’s high-end skincare and make-up ranges helped offset a sluggish performance in its mass market products, echoing a mixed earnings season for rivals who compete in some of these areas, such as Unilever (ULVR.L).

France’s L‘Oreal said demand from Chinese buyers - not just at home but in airport stores or other countries - had in particular driven growth, with younger consumers lapping up luxury products.

“We thought at the beginning of the year it would last only one or two quarters. It’s lasting at least for the whole year,” Chairman and Chief Executive Jean-Paul Agon told a conference call, adding: “It’s too early to say for next year.”

U.S. rival Estee Lauder (EL.N) is also riding high on a pick-up in Chinese spending, as it expands into young make-up brands popular with millennials.

L‘Oreal’s like-for-like sales, which strip out currency swings and acquisitions or disposals, rose 5.1 percent from a year earlier between July and September - an acceleration from the previous quarter and more than forecast by analysts.

Revenues stood at 6.1 billion euros ($7.1 billion) across the group, versus the 6.08 billion euros expected in a poll of analysts carried out by Inquiry Financial for Reuters.

They were down 0.9 percent year-on-year on a reported basis, after L‘Oreal sold off The Body Shop in June.

L‘Oreal’s high-end brands have held up amid a make-up frenzy spurred by social media users sprucing themselves up for photos on Instagram or Snapchat.

That in turn has fuelled competition, with many small independent make-up labels piling into the market.

The company’s active cosmetics unit, which caters to dermatological conditions or sensitive skincare, also progressed more than analysts forecast, and L‘Oreal said it expected to grow sales and profits across the group as a whole in 2017.

However, the outlook for the consumer products unit - which includes Essie nail varnish, Maybelline make-up and Garnier shampoo and is the biggest contributor to revenue - was less rosy.

“Growth in the luxury unit was excellent once again,” Berstein analyst Andrew Wood said in a note. “However, consumer growth remained lacklustre and below expectations.”

Results at Unilever, maker of Dove soap, came below expectations in the third quarter while Beiersdorf (BEIG.DE), owner of Nivea body milk, was more upbeat.

Agon said sales in the consumer products unit were tough in the United States and in France, with few signs of a turnaround in its home market although the company was hoping for an upturn as President Emmanuel Macron bids to reform the economy.

“So far the miracle has not happened. We hope that with the new political and economic environment in France that there will be an evolution ... we hope for next year,” Agon said.

L‘Oreal shares closed down 0.59 percent at 192.45 euros before the company released results. The stock has risen around 11 percent this year.

The company has been under scrutiny over its ownership structure after the death of Liliane Bettencourt, whose family is L‘Oreal’s biggest shareholder, as it could alter the relationship with another major investor, Nestle.

But executives have so far said no changes were afoot.