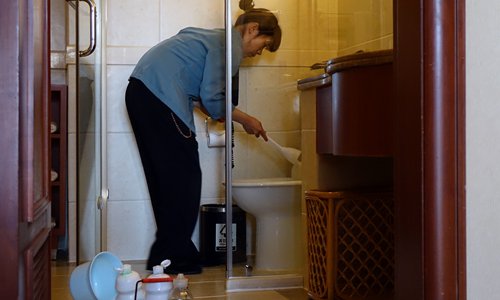 A cleaner attends to a toilet in a hotel in Beijing. Photo: VCG

If you thought that checking into a five-star hotel means the cup in your room meets five-star levels of cleanliness, a new video making the rounds online might make you think again.A video showing unsanitary practices - including using toilet water to mop the floor - in luxury hotels in Harbin, Northeast China's Heilongjiang Province, went viral on Chinese social media over the past week, prompting concern among netizens.Low incomes, sloppy work ethic and difficulty in supervising workers have led to unprofessional conduct in hotels, tourism experts said, amid calls for more monitoring from society and tougher legislation.Dirty truthsKempinski Hotel Harbin confirmed with the Global Times on Wednesday that it had dismissed a member of housekeeping staff seen in the video after an investigation found that the staff member had deliberately ignored standard hygiene procedures while cleaning a guest room."We are satisfied that this was an isolated incident caused by the admitted misconduct of a single employee," said Sun Qi, public relations manager of the hotel, noting that they are reviewing internal procedures and continuing to work in full cooperation with the authorities to ensure that this does not happen again.In the video uploaded by Pear Video on Sino Weibo on December 26, a reporter posing as a trainee cleaner uncovered some dirty truths about how cleaning is done in three five-star hotels in Harbin.In the Kempinski Hotel Harbin, the cleaner used the same brush to clean the cups and the toilet, and also used a bath towel soaked in toilet water to mop the floor.The room costs about 1,800 yuan ($277) per night.An employee in the video said that according to standard practice, one cleaner should only clean 12 rooms, with each extra room bringing the cleaner 12 yuan in income.In the Shangri-La hotel in Harbin, the same mop was used to clean cups and trash bins, again using toilet water. A cleaner said in the video that the disinfection cabinet was only there to show to inspectors when they turned up. The video showed that a cleaner at the Sheraton Hotel in Harbin folded up quilts on the floor and used the same brush to clean both the basin and toilet.Investigation launchedAll the three hotels involved in the video posted statements on their official Sina Weibo accounts on December 27 vowing to investigate the incidents and enhance measures to ensure cleanliness.On December 27, the local government set up an investigation group and punished the hotels in question, China National Radio (CNR) reported.Zhang Xiaochun, an official in charge of monitoring and management at the Heilongjiang Commission of Tourism Development, said that unsanitary practices were confirmed to have taken place at the three hotels, CNR reported."I refused to watch the video because I do not want to believe this is true," Chen Hui, a resident from South China's Guangdong Province and a frequent guest at the Sheraton, told the Global Times on Tuesday."I do not think this is a common phenomenon. I often see cleaners doing their jobs carefully," Zhang Hanyu from North China's Hebei Province said.However, five luxury hotels in Beijing - JM Marriott, Shangri La Hotel, Hilton, Intercontinental, and W Hotel Beijing - were also accused of unsanitary practices in September 2017.A video showing employees from Better Choice Better Life, an independent assessment organization, checking five luxury Beijing hotels while posing as guests drew widespread attention. They found the hotels failed to change and clean bedding and toiletries before the arrival of new guests.Overworked and underpaid"Such problems exist because it is normal for cleaners in hotels to be overworked and underpaid," Liu Simin, vice president of the Tourism Research Institute of the China Society for Future Studies, told the Global Times on Tuesday.Some people have low ethics and standards of integrity. "All they want to do is to make money, hurting the guests in the process," Liu said, adding that cleaning hotel rooms is usually done by individuals, making it very difficult to monitor.Liu noted that legislation and related punishments on hotel sanitation should be further strengthened, while monitoring and reporting from guests and society should be encouraged.The National Health and Family Planning Commission and Ministry of Commerce jointly issued a document in 2007 that requires hotels to change bedding and consumable items and clean the toilet before a new customer arrives. For long-term guests, rooms should be disinfected on a daily basis.