China will soon deliver a world-class ship to a Swedish company, taking another step closer to China's aspiration to becoming a supplier of high-end vessels. 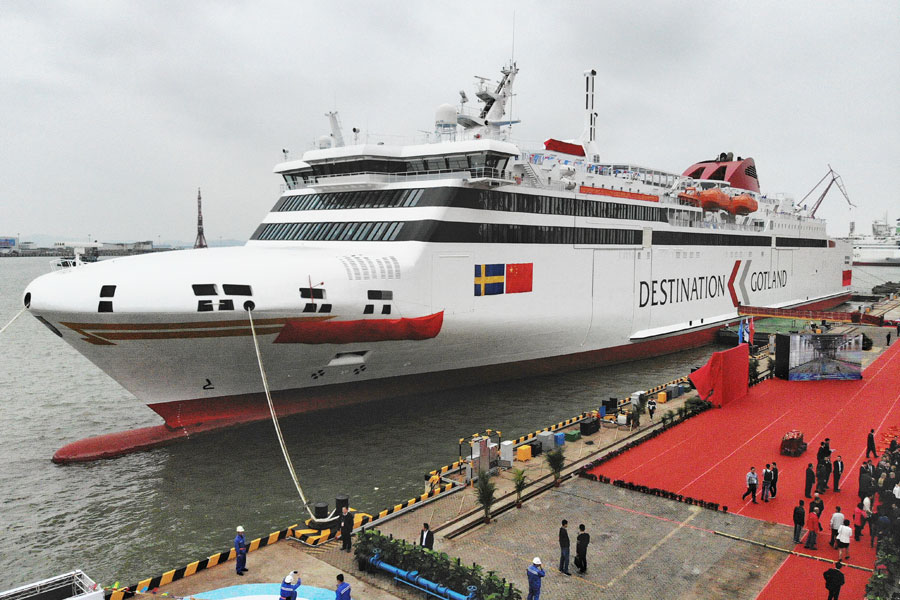 The company said the Visborg will be delivered to its buyer, Rederi AB Gotland, Sweden's oldest passenger line, in Guangzhou, Guangdong province, before year's end. A second cruiseferry of the same type is under construction for the same company, it noted.

The $145-million ship will be the most expensive civilian vessel ever built by Guangzhou Shipyard International, the statement said.

The cruiseferry features fast speed, ecofriendliness and a high level of automation and safety. It takes only one operator to control the entire ship if needed, the shipbuilder said. There are presidential suites, executive suites and restaurants-as well as children's amusement facilities-on the ship, which will offer passengers a comfortable journey, it added.

The Visborg is 200 meters long, 25.2 m wide, and displaces 18,100 metric tons. It has a cruise speed of 52.7 kilometers per hour and is able to carry 1,730 passengers, along with up to 600 cars. It runs mainly on liquefied natural gas and uses diesel as secondary power.

Rederi AB Gotland is proud of the Visborg as it is one of the world's most sophisticated roll-on/roll-off passenger ships with dual-fuel propulsion, Ann-Marie Astrom, chairwoman of the company, said at the ship's naming ceremony in Guangzhou on Saturday. She added that the cruiseferry provides further confirmation of the high quality and innovative capacity of the Chinese shipbuilding industry.

Although China is an experienced builder of naval ships, the nation is a newcomer to cruise ships because of the sophisticated technologies and complex manufacturing techniques required to build them.