CHINA Lyrics of 'Come on, Brother Trump!' strike chord among public against US tariffs offensive

Lyrics of 'Come on, Brother Trump!' strike chord among public against US tariffs offensive 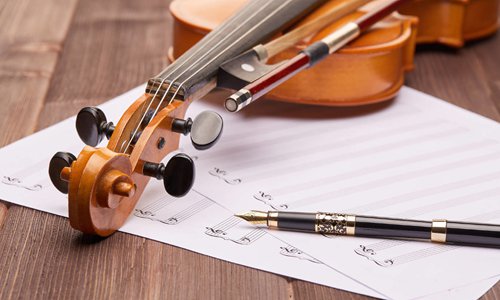 "You want to harm Chinese and American companies through unilateralism and trade protection;you want to curb China's development. That is a miscalculation." Those are lyrics from the song, "Come on, Brother Trump!" which went viral online after China struck back at US tariffs on Chinese goods on Monday. "With the trade war between China and the US escalating these days, my song has drawn more attention," the Beijing-based amateur songwriter "You Ge" whose real surname is Zou, told the Global Times on Tuesday. Even though it was written on April 20, 2018, it has been spreading on Chinese social media platform WeChat since Monday, because of its pertinent lyrics and reflection of "Chinese people's voices" toward the trade war. Chinese people highly support the government in fighting back against additional US tariffs after the nation's most-watched news program Xinwen Lianbo on China Central Television addressed the issue on Monday, triggering heated discussions on China's social media. Chinese netizens said the government's reaction showed the "conduct of a great power" which was very "encouraging," according to comments on China's Twitter-like Weibo. "China resolutely defends the interests of the nation and its people. Our confidence will never be broken. We will fight it out!" read Zou's lyrics. Friendly admonishmentZou is an employee in his 50s at the state-owned China National Petroleum Corporation and a member of the Communist Party of China. Under the pen name "You Ge" (oil singer), Zou has written 10 songs in the past two years. Most of his songs aim to promote positive energy, such as "Ode to Xiong'an" and "In Praise of Craftsmen." He said his patriotism comes from the education he received at his company, as they always sang songs such as "I Will Contribute Oil for Our Motherland."The melody for the trade war song is from Stephen Foster's famous "Old Folks at Home." Zou chose an American song in order to express his friendly feelings toward the US. "I called him 'Brother Trump' because it shows we are friendly and we can be more casual with him. This is a song of friendly admonishment," Zou told the Global Times.He added that the tension between China and the US will not last long because "he [Trump] is hurting the interests of both the US and other countries.""He is arrogant, but he will not continue to be. This is what I and most Chinese think," Zou said, adding that he understood that Trump's character and extreme behaviors are not supported by all American people.Tough reactionZou had no idea his lyrics had become popular again until he found his work appearing in different chat groups on WeChat. Strangers discussed his song "Come on, Brother Trump!" and praised the lyrics as being well-written.Even an unknown soprano sang and uploaded the song onto the internet. "Some of my friends said the song expresses ideas [about the China-US trade war] from the Chinese grass roots. They also said this is a good method of expressing our attitudes," Zou told the Global Times. He was also inspired by China's tough reaction toward the US' new tariffs on Chinese goods and said it is normal that the two countries "fight for a while" and "talk for a while.""Both sides will show their strength during the fight. It is not only a show but also a contest. But I believe the two countries will finally go back to the negotiating room," Zou said. "I believe both countries will gain benefits if we get along well with each other, and both will get hurt if we fight with each other," he noted, adding that win-win cooperation is the only option for the two largest economies in the world.